It was when I moved to London on a whim with nothing more than a temporary work permit at age 19 that my appetite grew for travel and the desire to move to Italy after a summer weekend getaway in Florence. I remember it like it was yesterday: I was in awe surrounded by beautiful architecture, fresh fish and summer salads. I turned to my travel partner and said:

“I want to live here one day. I want to learn Italian.”

…and I did. 7 years later. So I look back on London very fondly. It was my gateway drug to my expat desires.

Recently, I was offered an opportunity to stay in London for a month for a secret food and wine mission. I accepted. But the critic in me unleashed its analytical wrath within just hours of arriving.

To say the least, I was shocked by a lot of things concerning the British lifestyle. After living in Italy for nearly 7 months now, I was quite excited to go back to an Anglo culture for a little bit. Italy can be tiring for a young, foreign American woman. You think I’m joking, but in Italy I am not really taken seriously in certain situations based on my age and gender. Also, people assume I am a rich American tourist. It could be worse if I were in a developing country, but c’mon this is ITALY. It is a country in EUROPE. I shouldn’t have to make such comparative justifications.

As happy as I was to be surrounded by so many options in the grocery stores (like a whole section of greek yogurt! In Italy it is the same dinky overpriced Fage. One variety: plain.) I was relieved to be able to speak my language and be respected. And, to find such a variety of international foods, sauces, condiments, spices and organic granola hipster culture food. I was quite tickled when I was able to make this delicious shallow fried tofu and veg green coconut milk Thai curry: 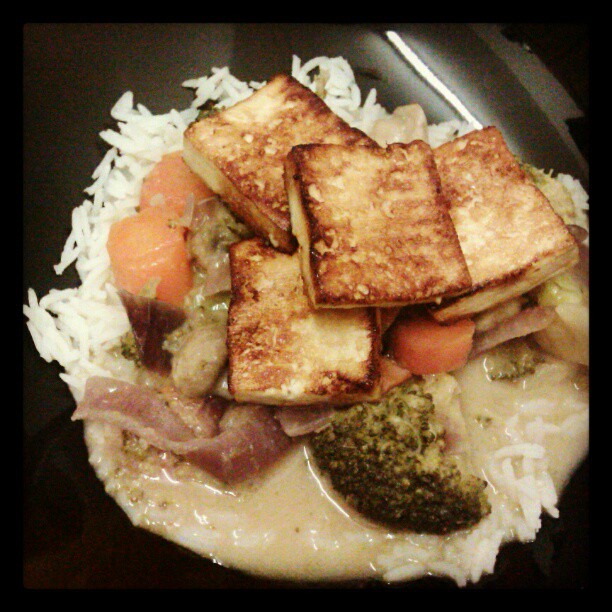 But after a few days, I found that I really appreciate Italian food culture. In London (like in Seattle) cuisine is imported. There is a plethora of fusion but nothing quite convincing of its own. Yes, the Brits have a cuisine and it is very modest and humble. Meat pastry pies, scotch duck eggs, fish, stilton, cheddar truckles, oysters, roasted root veggies…they do indeed have delicious fare. But what they lack is culture in comparison to the Italians.

I noticed a lot of drinking and not a lot of food pairing. In Italy, it is almost a violation to serve an alcoholic drink without some sort of snack- even if it is a small bowl of chips and nuts. “Happy Hour” in London consist of, not full on buffet bars of lasagna, salami, cheeses and radicchio salads like at an Italian aperitivo, but rather 4 beers for 10 quid. People work hard in London. They live in small flats. By the time you come home after a ten-hour day combined of work + riding the grey, crowded and smelly tube all you want to do is relax with a beer, eat something quick or grab dinner at the pub. And smoke a lot of cigarettes. My diet was at its lowest while I was there. Not because there isn’t good food, but because I was so busy and refused to pay a lot of money on food. Food is to me, a basic human right and should be affordable and good. Good food in London (and in Seattle) come at a premium. In Italy, good food is accessible to everyone. I can get a big bag of local organic farmer market produce at 5-10 euros. It’s not trendy, it is just the way they do it. And no wonder rates of diet-related disease are lower and people seem generally healthy and vibrant.

In London, I noticed an affluent couple taking a picture of perfectly merchandised Romanesco (a simple cruciferous vegetable related to the cauliflower priced at a whopping 9pound x Kilo). The said vegetable celebrity was paparazzi’d at the food hall at Selfridges ( Hellridges: a pretentious food museum) because the couple had never seen it before and I recall laughing to myself and trying really hard not to scold (judge) them silently for this blatant food voyeurism.

I did however manage to eat delicious samosas and Indian food on Brick Lane. Just walking through the colorful street with spices lining the store counters piled up in the shapes of upside down cones and fresh fried samosas sitting innocently in the windows wafting their savory turmeric and chili aromas deep into your nostrils, so deep that you can almost taste the mushy potatoes, curried lamb and fried fennel seed within those little triangular pockets of Indian heaven. As well as decadent spicy onion bhajee with tamarind.

While I was on my food mission, I discovered a couple true English food gems. Such as: Christmas Pudding w/ Brandy Cream (and Brandy Butter) and mince pie. A mince pie is not what you think I thought (a savory pastry pie filled with minced meat). The mince is actually a sweet pastry filled with a winter spiced apple and dried fruit gunk. Christmas pudding is this gooey sticky fruit cake thing that is soaked in brandy or some sort of booze and is set on fire and served warm with the brandy fat/cream products oozing on top.

I was lucky enough to be in a small beach town in East Sussex with a lovely Brit family that left a wonderful taste in my mouth about the English food culture. 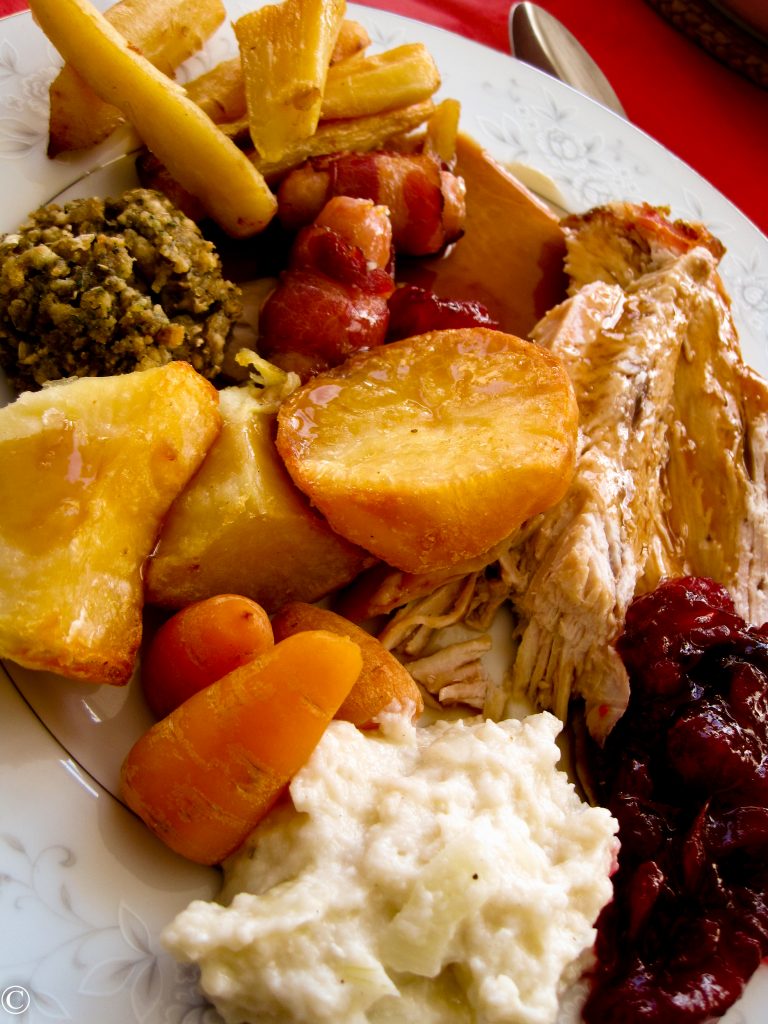 On Christmas Day, you basically eat everything all day long. Not much different from the rest of the Christmas celebrating world. Port and Cheese is not an uncommon compliment and neither are little sausages wrapped in bacon, homemade cranberry sauce and creamy bread pudding. The food social scientist in me asked a lot of questions concerning food and tradition to the family’s grandmother. She told me that in her school years, domestic sciences were taught where you learned all cooking basics and knitting. Like I imagine home-economics was in American schools. Those classes don’t exist anymore (at least in the U.S.) and no wonder why people of our generation are having to either teach themselves culinary arts as apart of hipster homesteading trends or simply eat processed convenience foods out of ignorance. I notice, that in America unless you come from a liberal, educated family (or a very rich one), your holiday dinners generally come from a box, a can and a cling-wrapped foster farms tortured processed meat product. In England, at least most people from a wide range of socio-economical backgrounds cook from scratch.

After my trip, I realized Italy is the best place on earth. People (Italians) sometimes take for granted how precious their country is. What other country has what Italy has: Rome, Venice, Sicily, food, wine, art, history, music, Milan…the list goes on and on.  Not only is Italy wonderful for its rich landscape and crystal blue beaches but the also the way everyone respects each other, their body and how to eat (and live) a good life. I heard so many Italians on the streets in London and it made me sad because I know why they are there. Young Italians are giving up on Italy and fleeing to more affluent (organized) parts of the world for a “better” life. But what constitutes a better life? To me, I left America and effectively rejected my culture in order to live a better life. In Italy. And this is where I plan to stay until its not fun anymore. 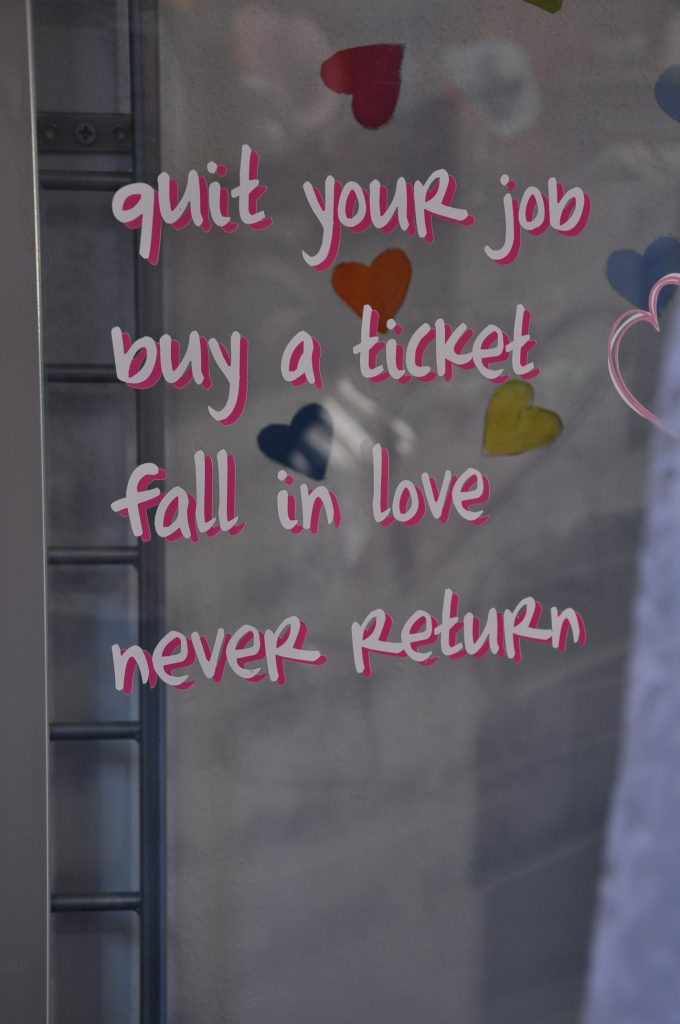