You don’t need to be in Florence to go to Bologna, and this should be a stand-alone post about why Bologna is a cool city to visit in general. But recently, I’ve been trying to figure out some cool day trips from Florence that are food-related.

Also, I get a little bit antsy if I’m in Florence, or any one place, for too long without an adventure. The last couple years, I’ve been traveling a lot, mostly back and forth between the states while I was trying to figure out which country I wanted to really live in. Also to new places like Turkey and Switzerland when I saw a few days free in my schedule. The last time in the states I took some time to reflect and finally decided I didn’t want to do this back and forth thing in the states anymore. Wanting some stability, I really wanted to call somewhere home and Seattle was not that place for me anymore. I don’t think even the United States is home to me any more, and for several reasons. I decided Florence was where my heart is. So when I got back this year, I was officially exhausted. I refused to leave Florence for a while. If any of my friends around Italy wanted to see me- I asked if they could come to me.

I needed a period to nest and a sort of honeymoon period with my new decision. I took time to properly settle in my new apartment and also take a break from my somewhat decadent lifestyle also by committing to a super intense detox, with one period including an elimination of things like corn, eggs, wheat, dairy and soy. This sort of hibernation/health kick period lasted a solid 3 months, which seemed like an eternity to me (I also drank very scarcely, even despite all the boozy images on my instagram feed. My work still had to go on- I just had tasting friends to take the “shots” for me:) I learned the art of “tasting”, sipping and portion control. I also needed to find a way to strike a balance with my potentially unhealthy career- I don’t need to eat and drink everything and I needed to make exercise a priority. I think a true food lover’s secret is to appreciate in small quantities.

But my true nature craves travel, decadence, recklessness and indulgence. I need to get out and see new things, and have a couple days where I live it up and eat and drink to my hearts desire. Against my nature, I started to be too responsible, going to be on time, somewhat complacent and a little lazy, refusing to leave Florence with the exception of going into the nearby countryside. And also working too much.

I realize some personal story has been inserted before getting to the real juice, but I sometimes wonder if I am being personal enough- after all its a blog, right? It’s not some travel article where I’m hard pressed to promote something.

So while Bologna is hardly an adventure, as its only 40 minutes away by the bullet train, it was a sort of reward I gave to myself after spending a few months eating really clean and not drinking so much. Bologna was the perfect reward- this is the land of rich food. 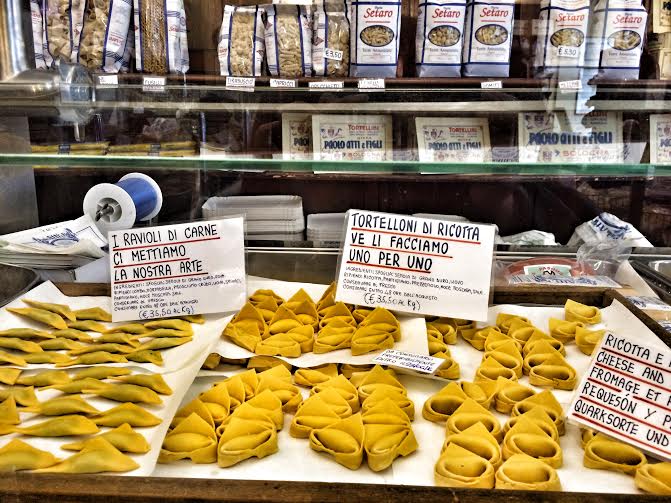 Bologna is located in the Emilia-Romagna region and the region as a whole is a gastronomic landmine. This region is responsible for Parmesan cheese, prosciutto di parma, fresh egg pasta like tortellini, lasagna and variations of ravioli, ragu’ sauce, loads of other cured meats and especially mortadella, balsamic vinegar, piadina, gnocco fritto and sparkling red wine lambrusco which makes sense as a sort of wine that I can only explain as one that is “giusto per stuccare la bocca di tutta ‘sta roba grassa!” Basically, a wine that can de-grease the palate of all this fatness!

When in Bologna, nicknamed “la grassa” (the fat one), I was on the hunt for: tortellini in brodo (which is like the chicken noodle soup to Italy but with no pollo– tiny hand folded tortellini swimming in broth filled with a a meat mix of mortadella, veal, prosciutto, Parmesan and other secret spices including nutmeg), mortadella ham, Pignoletto white wine, lasagna, ragu’, parmesan (not from Bologna but same region here) and any thing else with the Emilia stamp.

The city is quite cute, deep amber, red and sienna colors defining the architectural landscape. As well as these porticos, portici in Italian, which are like arcade-walk ways with columns. The city is said to have 38 kilometers of portico walkways! Which means, that the city still goes on rain or shine- most pedestrian traffic is protected by these iconic porticos and they are all unique in style.

It’s also home to several universities and has a young vibe with students running all over town during the day, book bag in tow. I’d been to Bologna before to visit a friend studying in 2008- but this was before I was a professional foodie so I was curious how my new palate and lenses would see it.

In search for a bustling casareccia trattoria for lunch to eat all these fatty things, I didn’t seem to find many of them full. It seemed like the more bistro soup/salad and panino places were packed, piadina (flatbread, tortilla-like panini) shops and eateries that did only sort of “tagliere” (meat and cheese boards). I wonder if this is because, this sort of cuisine (the pasta, the ragu’, the meats) were either more of a dinner affair or a special occasion ordeal. If you think about it, Italians don’t eat like this everyday (i.e. rich pastas like ragu and lasagna) and they were invented for banquet celebrations.

Being new in Bologna as a blind newbie and wanting to experiment by doing 0% research in advance and just showing up, was quite a learning experience. I tried that thing of following our nose, and that led us to a tagliere place which you really can’t screw up. Then for lunch, we thought to talk to the local mammas at the pasta shop. Passing by- these recommendations didn’t seem worth the chance. I also realize that being Italian doesn’t equate to foodie- and just because a local gives a recommendation, doesn’t mean its golden.

In the end, we gave in an consulted tripadvisor. Many of the articles we found online were usually outdated or written by someone with little food credibility. Since I usually refuse to eat at restaurants highly rated on tripadvisor, we made a compromise and consulted yelp, of all sites. We found: Osteria Broccaindosso

The service was great, the food consistent yet simple/rustic and they had a short menu of mostly pastas and a few mains, and of course tagliere. The cool thing is here they do a tasting menu of the pastas- I recommend only getting a taste of 2 and not three lest you would like to explode. The dessert was way too sweet, and an elaborate plate of egg-y marscapone on coffee soaked ladyfingers with 2 pieces of brownies. I was really disappointed by the desserts and wonder if the region actually has them- or even needs them.

Proof again to invest a little in research and connecting (somehow) with locals. But since I plan and research for work- sometimes I just want to show up and turn left out of the train station and see where the day takes me.

Where we ate wasn’t bad, but it wasn’t spectacular either. I got what I was looking for: tortellini in brodo in a bustling trattoria atmosphere. This trip taught me a couple things, do more food research in advance if food is one of your major travel activities. But also, how precious Florence is!

Bologna, cute and all, to me doesn’t really compare to Florence. Perhaps I’m becoming a bit Florentine but every time I travel to a new place, Florence continues to convince me as one of the best cities in Italy. Yes, it’s inundated with tourists but there is a reason for that- it’s a spectacular town. It’s absolutely gorgeous, its walk-able, its small and manageable, maybe could use a couple more parks, if you live here the public resources work somewhat well (as in the medical system), the buses actually are not terrible, the food scene is quite good even if extremely traditional. The weather is not too hot nor too cold compared to the north or the south but still has access to gorgeous coastal towns. And it’s THE city of gelato! Many other Italian cities try to claim this title, but Florence is where it’s at man!

All in all, Bologna is a great city to visit if you’re a food lover. What I found is that there wasn’t much variety compared to Tuscan food. I was constantly wondering…where are the vegetables?? There is a lot of umami and fat in what I found in Bologna, but Florence is spoiled for variety: vegetables, olive oil, soups, grains, ewe’s milk cheeses, cured meats too, things like saffron and truffles, wild game meats like pigeon and pheasant. Tuscany is overrated but undervalued in terms of gastronomic diversity. I don’t know if the average non-Tuscan knows much about Florentine or Tuscan cuisine besides the Florentine steak, wild boar things and some pastas.

However, I am sure there is diversity in itself in Emilia-Romagna and I haven’t even touched the surface. I plan to go back and explore more like Modena and Parma. If anyone has tips for food tours there, who do not claim that Bologna is the home of gelato, please let me know. I’d love to go back and write-up a proper eating guide to the city since I was unable to find one, at least easily!

Travel tips: Get your tickets for Bologna as far as in advance as possible- the trains fill up! Go to the websites of either Trenitalia or Italo.

In a never-ending search for food,

6 Comments on Bologna! A food lover’s day trip from Florence