Quick brief: I’m in Bologna for a month. So why you in Bologna? the food! change of scene! Putting my precious Italian degree into practice/remembering why I studied it in the first place- because I am fascinated by Italy! I wish I could immerse myself in ever major city/region like this for a month or 2!

Moving on…so part of the quest for this trip is to find the best tortellini in Bologna and to find someone willing to teach me how to make it. As in my last post, I’ve learned some clues as to what makes tortellini good, but wonder if I have a proper benchmark. In Florence, I’ve worked with cooking classes led by mammas and grandmas, some with Emilia-Romagna roots. Handmade pasta- down. But what about the broth or the filling? And even working with the culinary gatekeepers themselves, how does one really know a good tortellini? Is this truly a subjective quest?

So in a way, I have been blindly tasting, placing a lot of responsibility on my palate and somewhat incomplete culinary training- which I am totally willing to admit. This whole thing has made me question cooking schools, food personalities and culinary classes in general. There are lots of non-Italians offering cooking classes. While being native isn’t the end all, be all. personally I like to see if they went to culinary school, are diligingtly self-taught/study/immersive in local cuisine or grew up/spent a lot of time with an Italian family who actually can cook incredibly.

But if doing food and drink things in Italy has taught me anything is that: being Italian does not automatically equate culinary expert. They may know a recipe, but is it good? They may recognize foods and dishes- but do they have a discerning palate? We have to take palates on a case-by-case basis and ultimately realize- preferences for food (and wine) is subjective. I think what some Italians lack, is their awareness (and acceptance) of different cuisines and flavors. This curiosity, this willingness to explore and be open-minded, is perhaps what goes into a trustworthy, informed and trained palate.

Not alla panna, but alla crema di brodo di parmigiano e lemongrass. One of the best yet, even if my hypothetical Bolognese Nonna would probably beg to differ. How many tortellini can one consume before bursting? #eattheworld

I say all of this because obviously not being from here, I’ve had to scour the internet to understand the dining scene here, talk to local experts, cross-reference, and I’ve become so frustrated with some recommendations that are outdated or provided by questionable palates that I’ve said screw it, crumpled up my google map of “to-eat list” all starred and organized for once in my life and decided to follow the good ol’ nose. The only site/journalist I’ve found to have any validity about the food in Bologna is Luciano Pignataro, who is from Salerno (correct?) but has a few feathers in his hat (oh, you know a degree in Journalism, winning awards and writing books) and without having met him, I trust his opinion and writing. Although I am a blogger, I’m quite disappointed by the whole online world of writing, “journalists” and “experts.”

Another way to train your palate is to taste, so that is what I have been doing. Ordering tortellini at all the institutional places. It’s embarrassing how many tortellini I’ve consumed over the course of a week. Mind you, this is a special occasion food and consumed very sparingly. But, in the name of research- I must sacrifice myself! My whole body is aching, because not only am I strolling the streets for hours on end, I torture myself at the gym to balance out all this crazy sport-like eating. My favorite plate of tortellini so far has been at Franco Rossi and tied with Oltre. which does a double capon broth and uses pasta from Sfogline, what I suspect to be the best pasta shop in Bologna.

But next week, a journalist pal of mine, who has roots in the Emilia-Romagna will be taking me to the reported queen of tortellini: Lucia Antonelli. She says I should have her tortellini as a benchmark and judge from there.

On to cocktail fails…

One of the things I love about Italian food and drink culture is that certain cocktails are considered part of the whole appetite stiumulating/digestion process- i.e. it’s medicine! Vermouths, bitters, amari, grappe- they are there to help breakdown all this heavy food and Italians have no qualms at all discussing this very sensitive bodily topic. In Florence, there is a decent craft cocktail scene on the rise (thank you) and of course full throttle in Milan and Rome, but Bologna…they haven’t quite hit the mark. To give you an idea, their most famous bar in town is a Tikibar and personally I find fruit juice cocktails nasty. I’ve only found about 2 bars in town that actually makes what I ask for and doesn’t completely ruin a vermouth-based libation.

One super trendy place I went to didn’t have a menu and I asked for a vermouth-based cocktail and they made an old-fashioned- which has no vermouth. I happily paid, but tried to politely point out that that wasn’t the kind of drink I was after, i.e. vermouth-based. They blamed the language barrier, not surprised. This is Italy where the foreign customer is always wrong. Keep in mind that “vermouth” is pronounced nearly identical in Italian and English, and after almost 5 years in Italy- I’m pretty sure I can effectively ask for a drink.

Either not getting a drink I ask for, getting freakshow treatment or poorly balanced/prepared drinks has been a common occurance and thus lead to a general dissapointment in Bologna’s craft cocktail scene. Except at Casa Minghetti near Piazza Cavour or Pastis near Mercato delle Erbe- the guys there actually listen and has a fantastic stock of small-batch hooch. But Pastis has some depressing aperitivo snacks, i.e. dried, stale hotdog pastry bites that need to be thrown off the planet.

So Florence, I’m so sorry I ever doubted you and thank you for planting a craft cocktail scene which is extremely decent. Will you forgive me and take me back? 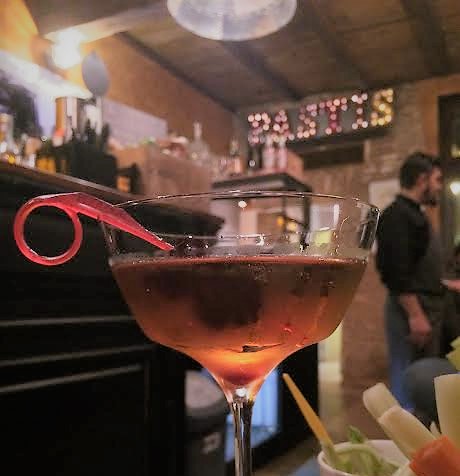 One of products Bologna is home to is Mortadella, or boloni to us Americans. Now, the production is wholly industrial and according to many shops in town, there is only one true artisanal producer of it left in Bologna. The producer is called Salumificio Pasquini & Brusiani and it’s most commonly called “Pasquini’s mortadella.” Pasquini has been making this old-world mortadella for over 50 years and is well in his 80’s. There’s loads that goes into making incredible aromatic, silky savory mortadella (strategic meat and organ selection, lard washing, fresh spices, cooking, grinding etc) and once you have it- you can never go back to the industrial stuff. And if you really want to go on culinary cloud 9- take advantage of any place serving “mortadella mousse using Pasquini’s mortadella.” If you talk to most Italians about the decline of their food products, you’ll commonly hear nostalgic waxing of fresh sliced aromatic mortadella panini for lunch or snack as a child. Most mortadella nowadays smells like plastic and tastes like rubber compared to the olden-days stuff.

Also, an open letter to Bologna and Italians: if you hear someone speaking FLUENT Italian with a Florentine twang at that, please stop responding in (bad) English. It’s just rude and a waste of both of our time. I’m not your opportunity for an English lesson- there are schools and trained teachers for that. Stop treating foreigners who live in Italy like a freakshow- yes some people have actually chosen to live in this country and learned this language. And not all Italians were born and raised in Italy! I’ve become really frustrated with being responded to in English or people wanting to practice their English (maybe if we were friends and you made my drink right?) and I guarantee you my Italian language skills are not the reason why I’m getting into these language tug-of-wars. I don’t know what gives- but think about it! How would you like going somewhere in the US, speaking perfect English and being responded to in (bad) Italian?

Verdict: Bologna a great town to eat in, spend some time, taking a break from the tourists- but dealing with run-of-the-mill locals sometimes feels like being in the twilight zone.

My picks of the week:

Franco Rossi (old school to the max but mad quality tortellini winner so far), Caminetto d’Oro (MY ULTIMATE FAVORITE), Da Bertino (not for pasta but for the meat carts), Acca’ Vineria (while the city sucks at cocktails, it wins with wine bars serving many natural wines), Enoteca Storica Faccioli (another great natural wine joint, with lunch and fantastic meat/cheese plates) Camera a Sud (more great wines) and Oltre. (tied tortellini winner so far)

In your wildly opinionated trust,