I have no shame in admitting it- I am a glutton, a lush and voracious lover of all things food & drink. Except I do not like raisins unless they are made into wine and I do not like most juices and sodas. Unless the juice is raw and promises to clean my liver and the soda is like a shrub. And not because it is the hipster way. This year for my birthday, I gifted myself a 10 day eating my brains out trip to Spain, split equally between one of the greatest culinary bastions in this universe San Sebastian and funky cool Barcelona. Mainly, because San Sebastian is famed as one of the best places to eat in the world.

My birthday is August 13th (you can get your presents ready for next year now) which falls in Italy’s national week of holiday. I mean, August is really treated like a whole month of holiday since it’s so damn hot. But really there is one damn day (Assumption Day on August 15th) which gives Italians a whole month (you heard right! A MONTH) to bid work a big fat ARRIVEDERCI. I, get to benefit from this cultural phenomenon & do not feel guilt ever for taking nearly 2 weeks off from Florence every birthday.

San Sebastian has been a dream of mine to visit because of its culinary culture fame. Their food scene split between Pinxtos bars (basque tapas & finger foods) and haute creative dining. This is a city with one of the highest concentrations of Michelin star restaurants in the world, as is only beaten by Kyoto, Japan. Combined with their sweeping beachfront, you can say this is my vision of a utopia city. This is like all the things I love about my hometown Seattle (beach, nature, fab food & seafood, etc) but with great weather, better people and more affordable food & drink. I was in heaven all 5 days and I want them all back. 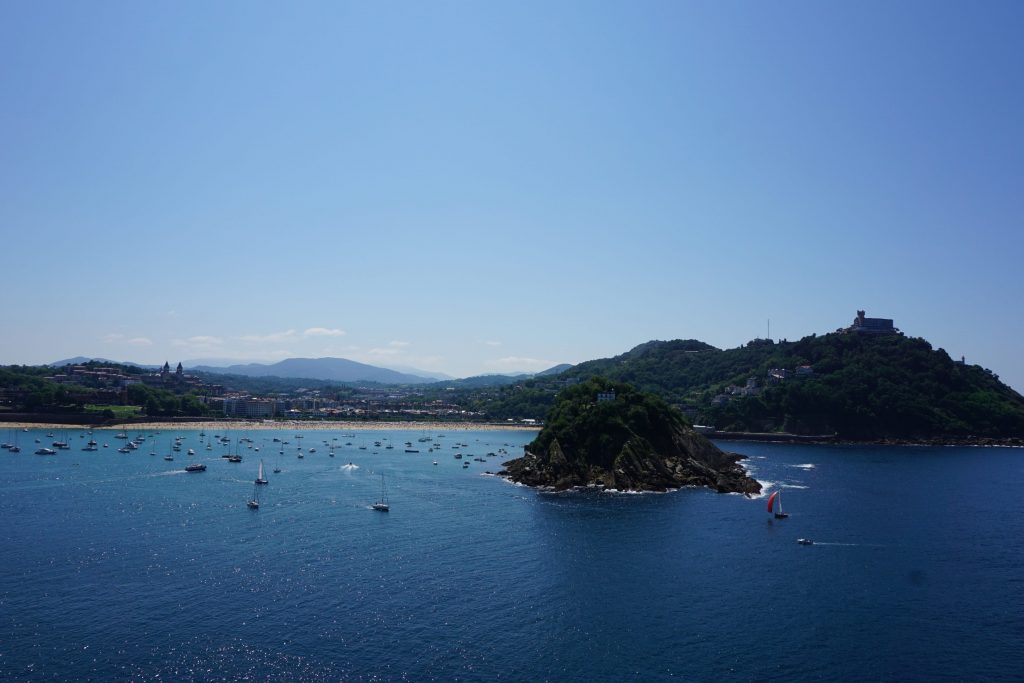 Something I’ve always been fascinated by Spain is they like Italy, have staggering strong culinary traditions & products. The difference I have observed in Spain, mostly after an epic food & wine tour I did through Spain & Portugal in 2014, is that Spain is respecting grandma but innovating and doing jedi-tricks in kitchens. I mean, all you have to say are Adria Brothers and Molecular gastronomy and you know I’m talking about Spain. While I love Italy’s romanticism for the past, its time capsule cities & eateries, really Massimo Bottura is one of the few creating something unique with Italian haute cuisine.

Living in Florence is a constant reminder of this culinary stagnation, and I blame mass tourism partly. But honestly, I blame the Italians general arrogance about how great their cuisine is and an infuriating stubbornness to move ahead. Recently, I made an Iranian bastani (Persian ice cream with saffron, rose water & pistachios) and brought it to a potluck dinner. The comments from some of the Italians was grating “ma sa di riso” meaning: it tastes like rice. This was a comparison to their food (risotto alla milanese which has saffron in it) as if it’s some holy grail benchmark. Can you just shut up about your food for 5 minutes and just appreciate another culture does food a different way?! These comments came from Italians who have rarely left their villages.

Thankfully my more dynamic Italian friends (and anomalies) who have traveled & lived abroad seemed to appreciate it and made comments without being picky 4 year olds about it. I don’t want to sound elitist about only traveled Italians are tolerable, but if you live in Italy you will know exactly what I am talking about. In the states, it is not easy to travel across borders- but Italy is so close to everything that there is no excuse to be so provincial! And even so, America is a melting pot of cultures and we are very accepting to many cultures, immigration and international foods. Well, at least we used to be or maybe we never were and I was fooled in my progressive liberal bubble on the West Coast.

But unless you run into a dynamic type of Italian, you will always be competing against their timeless classics, frozen in time and usually reheated from frozen at their local defunct trattorias. A lack of will to experiment and to be open minded with their palates is what is keeping Italy behind the rest of the old world culinary legends like Japan, Spain and France. Italian cuisine is ****ing fantastic, but it’s a mission to find a restaurant who does regional food well and does not contain ingredients which belong in a toilet.

I did an article on Vogue about the best pastas in Florence because so many places screw up this simple food or is done mediocre. Italians have been sitting on their laurels and the legacy someone else created, and this inhibits their culinary expansion in my not-so-humble opinion. And don’t get me started on the wanna-be haute chefs who simply copy techniques from molecular cuisine or the blueprint game-changers like Massimo Bottura have laid out. To chefs out there who are trying to be the next world’s best chef- Be Yourself- Bottura & the Adria Brothers are already taken!

This year I’ve had the privilege to take a couple epic trips: Iran and of course this one in Spain. And both trips I have come back disappointed with how Italy has (d)evolved over the last 10+ years, and if I were older I bet this would be over 20 years. I’ll try to not turn this into a bashing Italy party, but there are some things (apart from aspects in their cuisine) that Spain is definitely beating Italy at. Mostly: cheerful, generally nice people, sanitary public bathrooms, a thriving youth working force & more young people in general. The first thing I notice back in Florence is all the elderly I feel my generation are way outnumbered by. I respect the elderly and love that Italy doesn’t marginalize the elderly the way we do in the states, shoving them in a home to not be seen or heard and die a lonely, medicated death.

Generally, I think this a problem for any one society like Italy’s (a country in EUROPE may I remind you!) to have a low birth rate like Italy’s and a low youth population, due mainly to them leaving to find career opportunities elsewhere. Sometimes I think Italy is a house of sand.

Of course, some of the negativity speaking is from post-holiday blues. I don’t want to be one of the privileged outsiders who sing Eat Pray Love praises of Italy and knock her off her pedestal when it suites me or when I’ve become annoyed with a cultural difference. It’s not that, really. I don’t consider myself a shallow outsider, with spotty Italian language who is on some self-indulgent journey and using Italy as my edifice.

This is my space- take it or leave it. I compose from the heart and gut. I’ll never be a bubbly, fluff blog. I’ll never be the authority or go-to guide for Florence nor the person who charted Tuscan or Florentine cuisine and I have no strategy for my blog except to share strong feelings, my sincere advice on where to eat well, observations and genuine opinions about being a food & Italy lover living out their dream in Italy. Or perhaps now, what was a dream. Take it or leave it. Just like I should do with Italy.

This post was intended as a useful neat guide of where to eat & drink in each city, but felt the need 1st to vent my thoughts and observations after being back. I write enough guides outside the blog, this used to be a space where I could share my thoughts. I am taking my blog back to indulge in what this used to be for me.

Another note I wanted to make is I was in Barcelona during the horrible Las Ramblas attacks. Thankfully, I was at a museum when it all went down and the only thing I had to do was stay put for a couple hours (easy in the Picasso Museum) while we understood if the attackers were on the loose or if we could safely exit. It was a strange experience, for sure. Especially since 24 hours before exactly, I was on Las Ramblas where the attack occurred, on my way to peruse the Boqueria market. What was mostly strange is trying to get to a taxi and you really feel this survival feeling- nothing like I’d ever felt before. I was lucky my only struggle was finding a taxi to get back to my place. And strangely enough, the whole thing made me less scared to travel than ever before.

I think these things, while horrible, are out of our control. I don’t wish to live in a world like this, but the reality is this is how things are for now. I thought what would have happened if I had been on my way to the Boqueria market just 24 hours later and been in the crossfire of what occurred. I would have maybe met my fate doing what I love- traveling and eating. I’m not saying I want to meet the grim reaper’s wrath anytime soon, but this is something I believe we have little control over.

And still, the risk of getting hurt is low. There were 32 million visitors to Barcelona in 2016- that means on average there are 88,888 visitors daily- you get where I am going with this. Sure, be careful and follow your gut- but living in fear & not traveling out of the slim chance that you may get involved in some incident, is just not how I want to live. I want to keep living my life exactly as I wish to, without it being influenced by fear. If it happens- holing myself up in my apartment isn’t how I’d want to live out my life if this is how I can avoid risking meeting Mr. Reaper.

The point is to not minimize the victims and the horrors of today’s vicious violent acts against innocent people, but it’s to encourage you to not let them stop you from living your life.

I’ll leave this now as is. I promise some next handy posts will involve my favorite picks for where to eat in each city. Thank you for indulging my strong & strange opinions.

In your thoughtful trust,