If Florence had to choose to be renowned for one thing food-wise, it would definitely be this thickly cut, grilled to a bloody char La Bistecca Fiorentina. Mention these 3 words to any Florentine or Florence transplant and assuredly a debate will ensue. There are many opinions on what is important for a steak, where to get the best steak in Florence and most of all, what breed of cattle la bistecca fiorentina should come from. But restaurants in Florence are evolving to cater to meat connoisseurs, offering more than just a mystery meat variety grilled in the Florentine manner.

In the last 6 years of living in Florence, I’ve noticed a trend of steak restaurants deviating from the homogeny of the Chianina, but also recognizing placed importance on provenance. Ask me 5 years ago where to get the best steak and I would have said Perseus. Ask me a couple years ago and I’d say Ristorante Fagioli because they are probably the only institutional, historical restaurants who know how to handle cuts of chianina while making everything else on the menu damn near perfect. Ask me today and my allegiance would be to the steak stop on my progressive dinner crawl in Florence. 😉

I also really like Osteria dell’Enoteca which is a newish steak & wine restaurant (but not only- their menu is rather ample with pastas and such) with a selection of specialty breeds to choose from for their cuts with a wider gamma of wines to match.

Steak and snacks in carnivorous spirit with @julian.biondi @anastasia_kovrigina and @nadadinada at choice new meat bar in the Oltrarno @thecutflorence 😘🐮where cuts are succulently delicious 🤤#Eater

But most recently, I visited The Cut which is a new steak joint just off Ponte Santa Trinita’ in the Oltrarno and I highly recommend it if you’re looking for a unique steak dinner in Florence. There are specialty selected varieties & styles divided by Fiorentina/T-Bone and Prime Rib/Costata. Plus they offer sauces to slather on each steaky bite, but I found the meat there so flavorful there was little need except a touch of green chimichurri intermittently. I’m personally content with the fact Florence is picking up that not all steaks are created equally. Slowly but surely, the Florentine palate is opening up the purist mentality away from the staunch chianina absolutism.

Many in Florence, as well as the international dining obsessed, have this notion of la chianina being the holy grail for which la bistecca should be sourced from. Why? Because it is Tuscany’s homegrown breed and Italians are unforgivably proud of their native foods. Sure, there is a unique history with it and I personally find it a fascinating topic. And while I am guilty of this allegiance as well, after spending loads of time both eating and talking to chefs- I’ve found chianina isn’t the end all be all for a tasty steak.

This is some of the beef I have with Chianina at this point in the never ending rabbit hole which is understanding food:

Personally, I think if done correctly I prefer the lean, muscle bent ciccia you can almost taste the verdant green countryside of which it spent its life grazing on. But from a taste point of view- it’s not the only be all end all.

I quite enjoy this new trend of specialty driven restaurants. I have no qualms with an eatery choosing to source various steaks from outside Tuscany- but just be transparent about it. What happens at most trattorias is they advertise “bistecca alla fiorentina” but if you look closer or ask, the meat probably came from Northern Europe or South America, or from Spain or France. Yet they either charge the premium amount as if it were Chianina or charge a ridiculously low price for a Fiorentina. Either way, most diners assume the meat is from the lush pastures of Tuscany- when 8 times out of 10 it is not and then diners leave thinking either a Chianina can cost 25eu a kilo at a trattoria or a 55eu a kilo steak is from true Chianina.

While you can call a “bistecca alla fiorentina” without it needing to be from Chianina as it’s simply a reference to style and cut. If restaurants are going to abandon traditional breeds to source their cuts, I think there should be some research and attention to detail in it’s quality- and just be honest about it on the menu and declare the variety!

If you’d like to taste one of the latest specialty steak joints serving an array of bistecca alla fiorentina in Florence in addition to other meat snacks, I highly recommend “The Cut.” 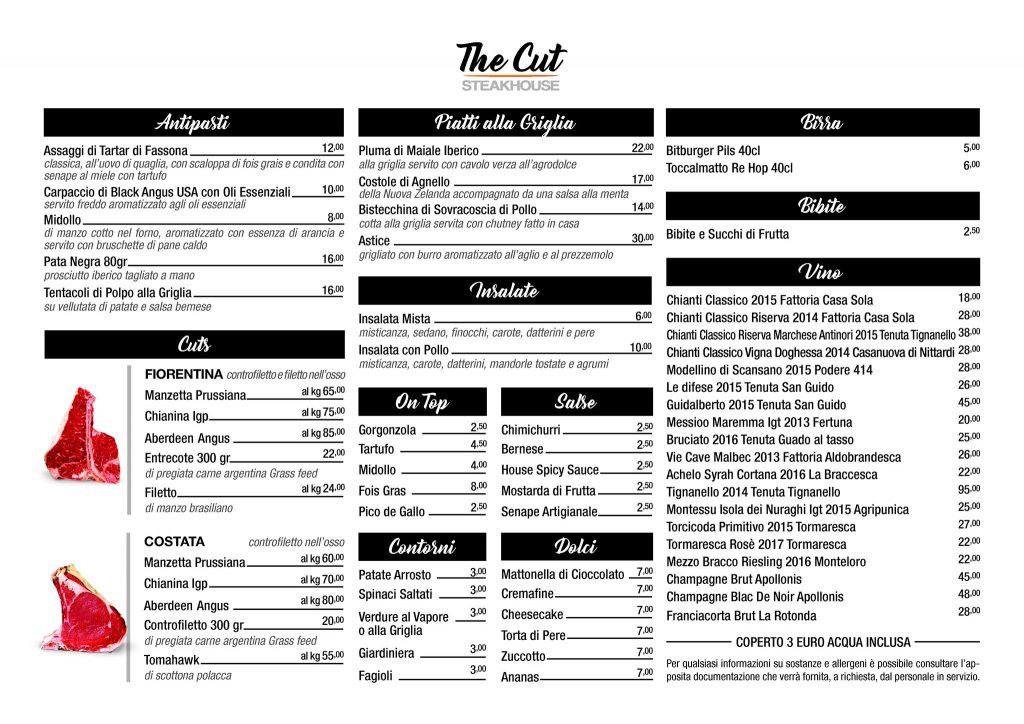 They have a reasonable selection of wines although there’s definitely room for improvement as I found it a bit limited and with kinda commercial producers, I’m more into the tiny salt of the earth winemakers. I dig the bar seating and the fact they do sliced pata negra ham plates for appetizers. The sides are decent, and I quite enjoyed the chocolate and rum dessert options. If you’re looking to understand who this would be ideal for, I’d say this is a casual modern bar eatery for meat lovers.

Here are a few bites from my iphone- pardon the lack of high res quality. Enjoy!

What are your thoughts on La Bistecca Fiorentina? What’s your favorite place for it in Florence?

Until till next time! I just got back from an epic week in Sicily and I will be posting all about it! As soon as I catch up on a few gym and salad sessions 🙂

3 Comments on Meat Trends and Bistecca alla Fiorentina in Florence