For as long as I can remember, Sicily has been a distant curiosity. And not because I’ve never been- anzi. Post study abroad in Rome during a Spring/Summer of 2007 I took a trip through Sicily via Catania, Agrigento and Palermo. 10+ years later at my current stage of culinary curiosity- I wanted to return to Sicily. I decided, this place needed to be mine- at least for a few fleeting days.

This post details what ensued over 4 days in the Mt. Etna area of Sicily. The subsequent 4 days of this trip covered Noto, Modica and Vittoria but I’ll get to that in a a future post.

Tuscany is great and all- but I’ve begun to have a wandering palate. I’d been growing curious of mineral rich wines from volcanic Mt. Etna which seem to be all the rage in the culinary wine world.

I landed in Catania with views of its bubbly volcano from my airplane seat and sunny skyline. Instantly, I was enthused. I couldn’t wait to get off the plane. Not wasting any time, my first stop at 9am was a bowl of almond and pistachio granita and pudgy citrus accented brioche from a caffe in central Catania just below the botanical gardens. This one was okay, but I knew there were better to be found. What a luxury to be able to be picky about granite!

I tore the knob piece of this doughy yet dry eggy bread brioche and dipped it my bowl of  melted around the edges almond slushy and pistachio milk on the bottom. And while this bowl wasn’t the max of what I’d endure for the next 7 days- it was nonetheless yum worthy. 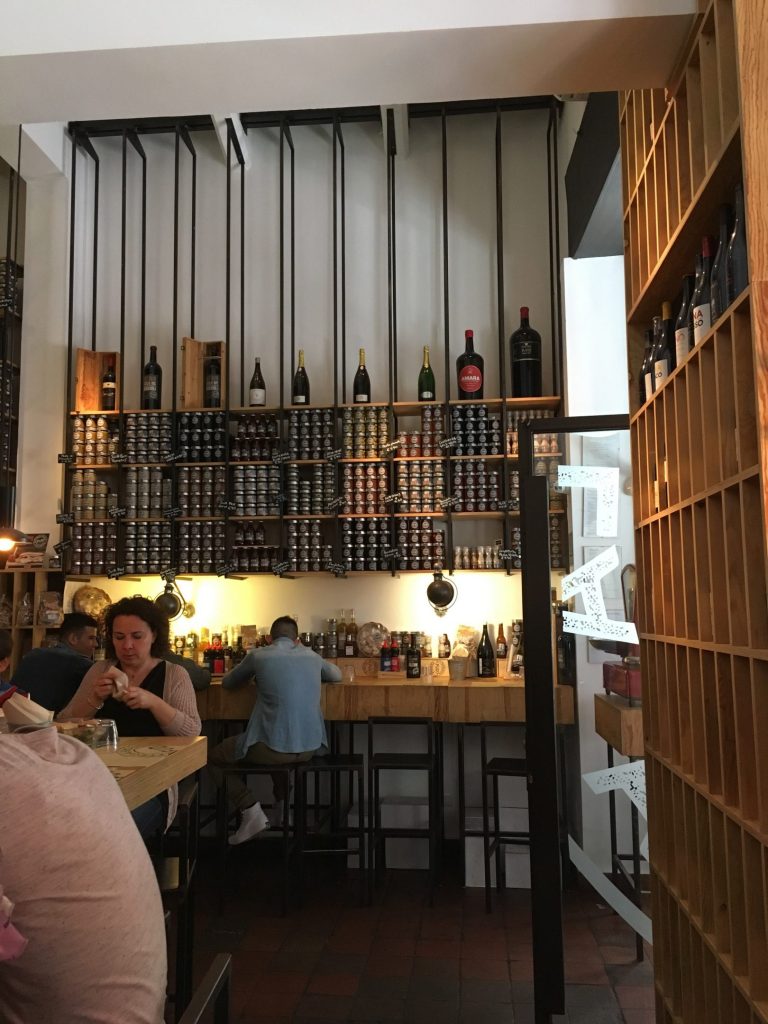 After a whirl in the botanical gardens being fascinated by walls within defined by lava stone, I head to lunch at Fud in Catania and immediately see Sicily’s proud fixation with its materie prime, a term hard to give justice to in English.

A modern gastropub feel, Fud in Catania is an essential stop for food lovers like you and me. Tongue-in-cheek Italian phonetic menu names are enough to keep one entertained.

Now as a sommelier, I made sure to plan out some winery visits. My first stop was to Benanti off the volcano and I was instantly charmed. This is a family-run enterprise helmed by 2 brothers and their pop, and definitely a wow winery. The stone sculptures, hillside backdrops, deep black lava soul and contrasting green leaved vineyards. Plus the wines- fresh, fragrant, light and earthy. Hints of pomegranate yet lightly feathered in fruit. 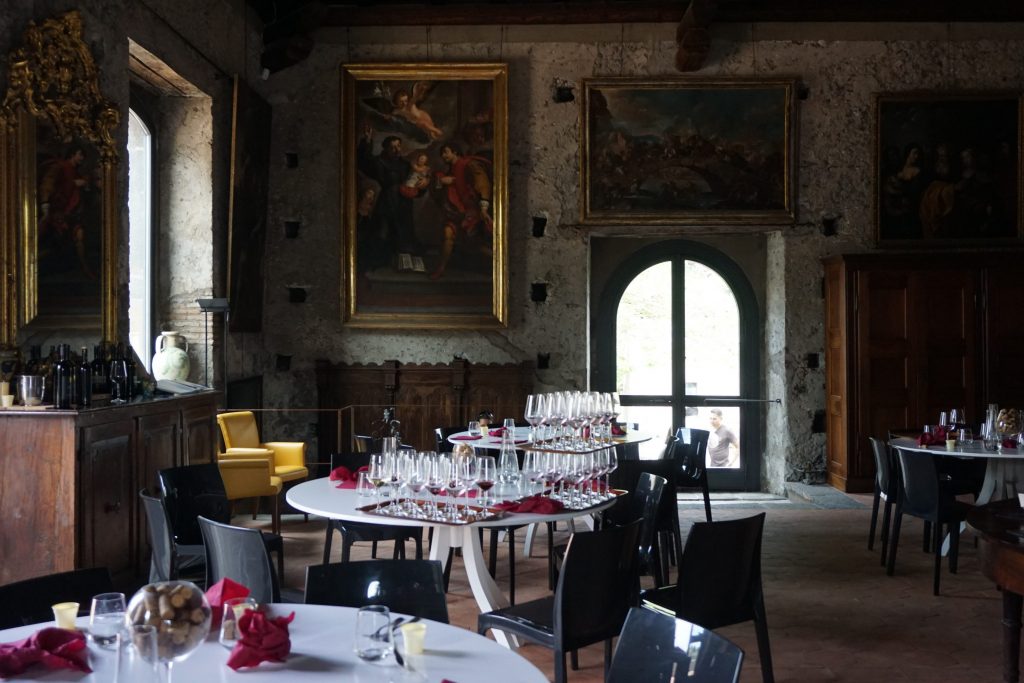 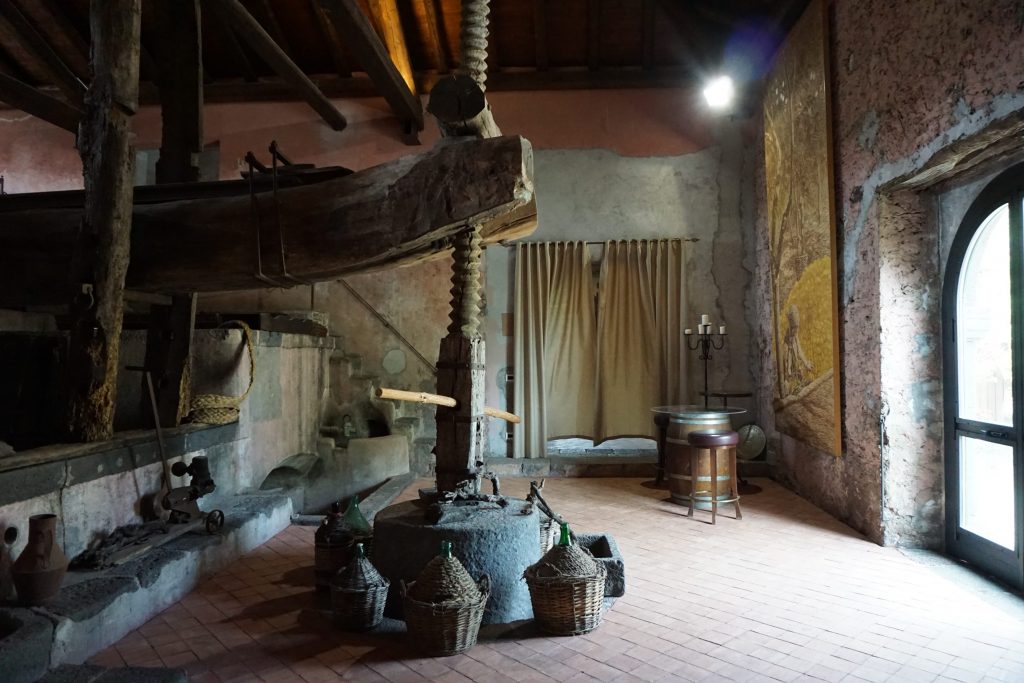 Part of the reason I wanted to explore Sicily was to visit wineries in the Etna DOC and get to know the wines produced from this magical lava soil. Volcanic wines are kinda all the rage in the Italian wine world, and it’s not just Sicily with volcanic soils (i.e. Campania & Veneto)

Sicily tends to be assumed for jammy inky reds (Nero d’Avola) and juicy fruity whites because of the heat and the Sicilian wines that end up on restaurant tables and at wine retailers abroad. I invite you to seek out more than Nero d’Avola (unless it’s in Cerasuolo di Vittoria) and seek out wines from Etna.

The volcanic soil in the Etna DOC gives tons of earth, elegance and minerality. Plus the breezes from the sea gift a mouthwatering freshness. I am officially obsessed with this place.

I won’t bore you with all the wine talk and granular food specifics, but what I was impressed by the most were these producers grit. I fell in love with Sicily for several reasons, but mostly it was for their obsession and love for their terroir. Giuseppe and Valeria above, are determined to carry on their family’s legacy and produce terroir-driven wines Giuseppe’s grandpa dedicated his life to. We walked through the stormy vineyards where Giuseppe spoke fondly of his nonno, a true land steward working always with a glass of wine in hand.

Aside from an incredible story of following love for their land and heritage at all costs, the wines were fascinating. The reds- based on Nerello Mascalese and Nerello Cappuccio- chewy, small red fruit expressive, unfiltered and of course full of characteristic minerality. Their Carricante was notable of a flavorful complex orange wine. Perfectly paired with smoked ricotta and thickly sliced salami. Etna produced Carricante in general, gives Burgundian chardonnays a run for their money. 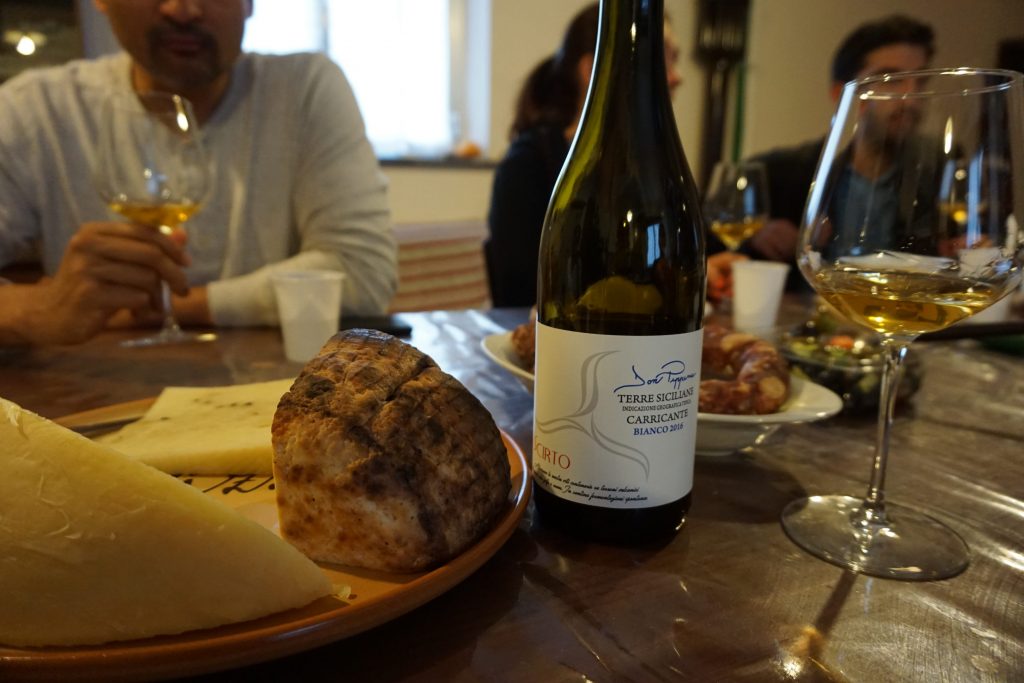 I also fell in love with Mariarita Grasso of Filippo Grasso- she and her brother are also carrying the torch of their family’s wine making legacy. Some wines are age-worthy some you want to drink all right this minute and ideal for food pairing like with cheeses, meats, pastas and roasts. Luckily, you can find Mariarita’s family wine in stores, abroad (I spotted them on Total Wine) and even at the Catania airport!

When I was Etna side, I was in the rural area of Randazzo which is a tiny village of 10,000 inhabitants at the foot of Mt. Etna. I found it to be a great base for visiting Etna wineries and towns like Bronte. 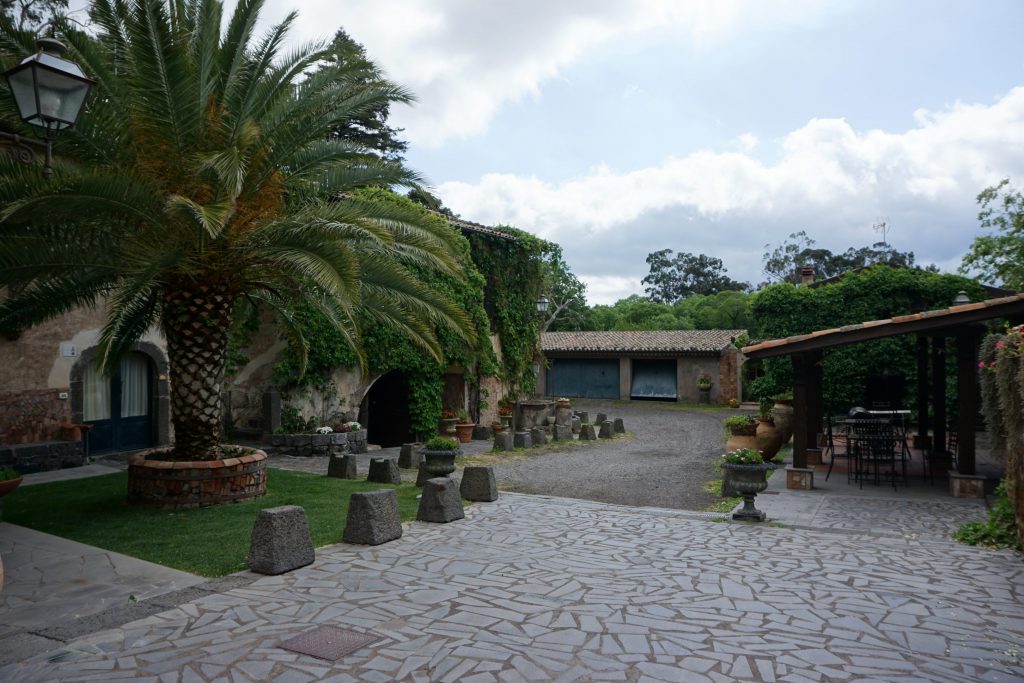 I stayed at extremely cute B&B Parco Statella which I highly recommend to anyone looking for a rural base in the Etna area should you be planning winery and food producer visits. The only drawback was spotty wifi but you should be busy enough to where you don’t notice.

Staying in Randazzo afforded me the ability to escape the madness of city life and taste a slice of everyday country life outside the city, which was a much needed recluse. Florence has become unbearable in the sheer number of feet stomping the fragile grounds.

I have a distinct memory at a local produce shop, and the guys letting us sample nespole (loquats) and fresh peas and favas. And I’ll tell you- I was floored. The explosion of freshness from those sweet vegetal snap crunch fave. The nectarous nespole explosive in ripe sweetness. When in the states I notice the intensity (or lack-there-of) regarding American-grown produce compared to what I’m spoiled with in Tuscany. But coming back to Tuscan grown produce after Sicily, I started to think “this tastes of nothing!”

While Bologna has ruined me for restaurant quality compared to Florence, Sicily has ruined me in the produce department. I love Tuscan food culture and its no-waste ethos down to stale bread, but the more I travel the more I wonder: is this Tuscany truly special for its food and wine? Or is the region just really good at marketing it? 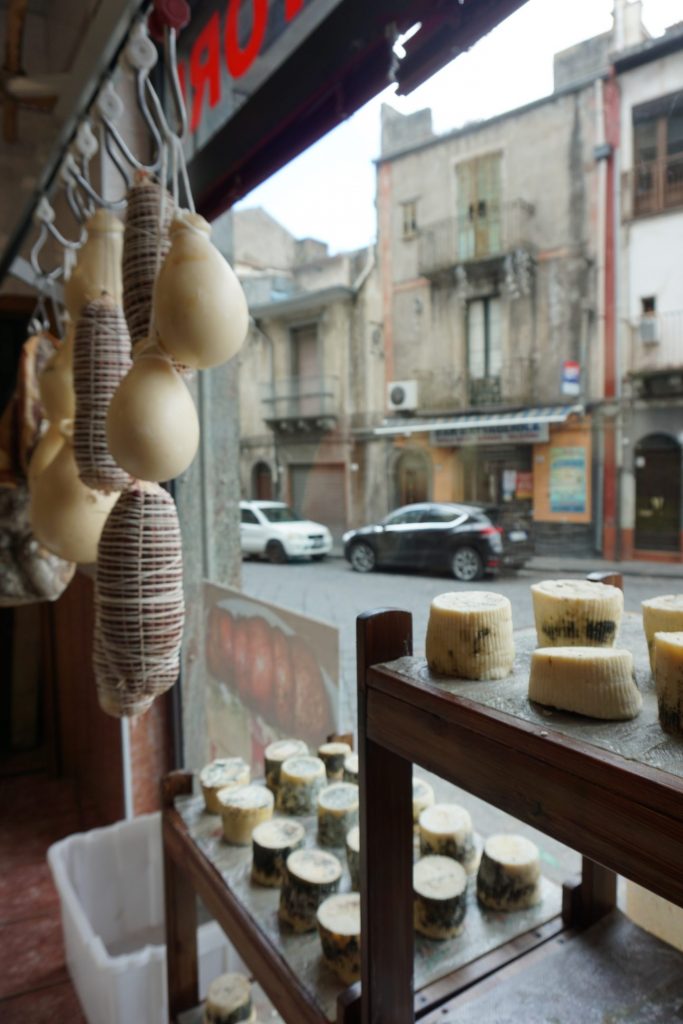 Everyday I was amazed by the artisans who transformed their high quality volcanic soil grown foods into simple overwhelmingly delicious fare.

And constantly amazed to discover what you could find there: saffron, pistachios, almonds, goat porchetta, goat ricotta, smoked cheeses, thick slices of lardon laden salami, and so on.

One of the most unforgettable experiences (as if everyday was filled with them) was making goat cheese in a garage with some guys resembling Moretti (Luigi Moretti). 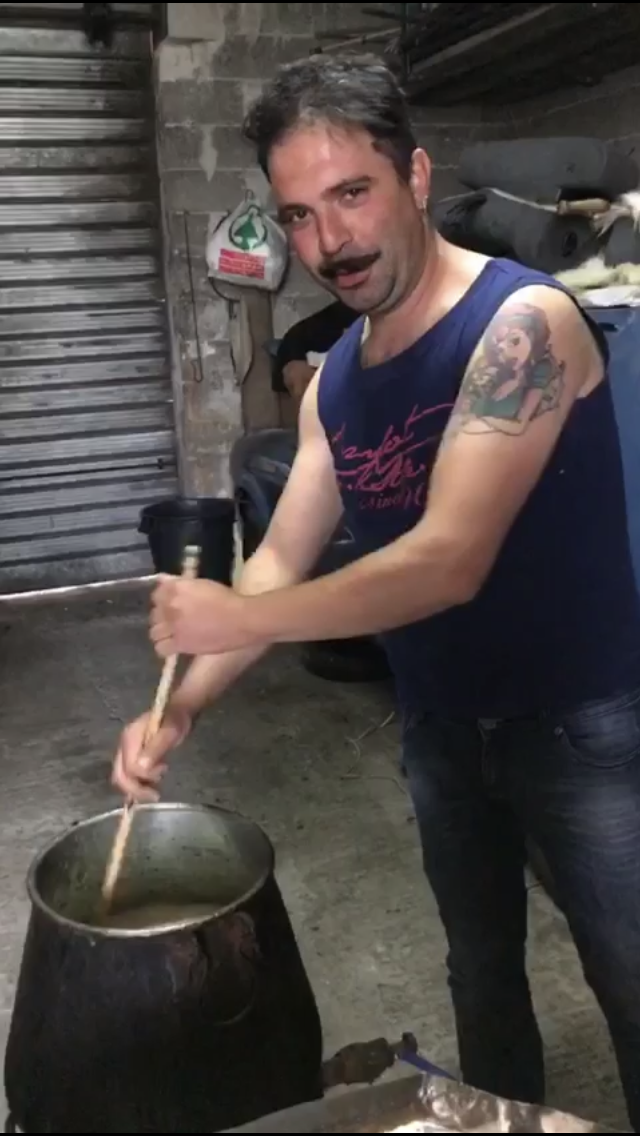 Muscle bar mustaches, cigarette hanging off the side of his mouth as if a permanent fixture, muscle T and 50’s tattoos and for the first time in a while I had to listen super closely deciphering Italian from the thick country vernacular.

I live for experiences like these- the health code renegades who use random makeshift sticks for stirring, secret tricks like using a broken fig branch and its sap for curdling. Throwing back Peronis and trying not to pass out from the propane fumes and hoping with all our might that side lip hanging siggie won’t cause this garage to explode. The resulting cheese was warm, salty and kinda squeaky chewy. This was primosale (fresh salted formed cheese) which would be filled with peppercorns and left to age.

The milk used came from the goats just outside the garage. The last time I got this close to the heartbeats of Italian gastronomy was when I WWOOF’ed in Puglia, crying over garage made braided mozzarella and warm ricotta with honey from their hives. That was 10 years ago. Why did I let so much time pass?

Tuscany has some salt of the earth producers, but for the most part the region has wised up to its entrepreneurial potential and thus become super commercial. Tuscany is (somewhat) organized and probably don’t pose health risks like inhaling propane in closed spaces, but it’s not even close to being real. If you can, make it to Southern Italy before it gets too popular, Although I’m not sure if this will ever happen- I think the masses will always flock to the holy trinity of Venice, Rome and Florence, leaving the un-manicured south for us of grit.

Last but not least was the sheer honor to make granita with Giovanna Musumecci. While the food world praises mostly men in the culinary arts (a great example is when Netflix’s pastry series famously ignored women albeit a field dominated by women). Giovanna has been kicking ass, winning awards and making some of the best pastries, gelato and granita on the planet FOR YEARS. Her attention to detail is painful. She grates lemon zest and allows it to infuse before making her lemon granita. She meticulously sources quality Bronte pistachios and toasts them in house for her gelati, granite and baked goods. I am in love with this women, and pretty much everyone I met on Etna.

The last taste I was left with which made me hungry for more was lunch at Il Giorgio e Il Drago- again, another family run joint. Fresh hand-made pastas and nonna cooking up in the back, a plethora of vegetable dishes with wild herbs packing the flavor, a decent wine list and Sicilian-made amari to digest the whole show.

My last trip to Sicily 10 years ago was just as impactful, thanks to some serendipitous conversations on my last night in Palermo is when I decided I would never give up on wanting to be anywhere else than in Italy. It was this turning moment I realized I should live where I felt most with a heart full. And that’s always been Italy. Sicily, you’ve struck again in rejuvenating my adoration for il bel paese.

I hope to return very soon, who knows- you may see Curious Appetite culinary tours in Sicily- stay tuned!

I’m sorry I took so long to post an update about my Sicily trip. I didn’t mean to ghost you all. My next entry will detail my second leg which was Noto, Modica and Vittoria.

In your Sicilian curiosity,

1 Comment on Feasting on Volcanic Etna in Sicily: Wine, Pistachios and Granita