I’m painfully slow when it comes to jotting my travels back to you. I blame the ease of Instagram for my lack of consistency in travelogue’ing. Snippets and soundbites are all too easy to upload! But a blog post requires me behind a screen after work…which is again usually behind a screen….you see the dilemma?

As the sun spills in my little study nook in San Francisco I’m currently dwelling in, crunching away at a bowl of fresh pomegranate fruit, I reminisce over my visit to Modica this past May and of this year coming to a close. It’s been a fruitful year in many ways: I became a certified sommelier after nearly a year of studying, this blog was selected as a Finalist for Saveur Annual Blog Awards, loads of great meals and time with dear ones had and I was lucky enough to travel between San Francisco and Italy for a good chunk of the year, including 2 jaunts to Sicily.

Modica is an exceptionally special Sicilian town you really should visit for a plethora of reasons. My visit was marked by feasting at one of the most incredible restaurants on record, a stay at the best boutique accommodation you might ever find and chocolate factory perusing! I’ll give all those details in a minute!

What is Modica known for?

Apart from its smack you in the eyes stunning Baroque/Goth architecture, Modica is home to a special type of cold-processed chocolate inspired by the traditions of ancient Aztecs. The history of it is fascinating! Without being super dry (does food writing always have to be as exciting as algebra equations?), we can blame the Spanish conquistadors for bringing cacao to Europe in the 1500’s and then arrived in Sicily in the 1600’s. The Spaniards left in the 1700’s but the chocolate rituals remained.

So why chocolate in Modica and not somewhere else in Sicily?

So from what I understand from an interview I conducted with the only direct trade chocolate cooperative in Italy (Quetzal)….

Modica was a unique place in terms of luxury food democracy due to the Contea di Modica, i.e. it was a Feudal territory/county. For centuries, chocolate was consumed by nobles and the borghese, which allowed it to diffuse and become a popular comestible.

Typically, coveted foods were enjoyed by like the .000001% which were of nobility but in Modica let’s say the Borghese made up 5% of the population, therefore much more people had access to chocolate! This is mega simplified and data recalled from various interviews back in May, but this is a blog- not a Smithsonian article! My brain is mush as it is from day-to-day work stuff, I beg you to give me an intellectual break on my personal blog!

So before Modica chocolate was commercialized into candy bars supposedly around 30 years ago (according to Quetzal reps), the chocolate blocks was melted as *just* a beverage, consumed at home around Modica. And Antica Dolceria Bonajuto was the first chocolate purveyor in Modica founded in 1880 but is responsible for making it into a bar confection.

Hopefully I didn’t screw up that crash ‘splainer in Modica food history!

When I went to Modica this March it was apart of a bigger picture. Back about this time last year in 2017 I made a few “new years goals.” Some included to travel more and to reduce some unhealthy behaviors such as drinking too much and not exercising enough.

I came to the realization that our lives while still free of restriction and in good health is a precious commodity to not waste away. Even though I live in Florence and it seems I live an exciting adventurous life online, really I’m just surviving Italy like most real people and one who doesn’t pretend Italy is not at (most) times super bananas non-sensical.

Anyone who says “I’m only going to say polite things or if I don’t like it I can leave” is probably sitting on a whole lot of privilege. It also makes me question their integrity in emotional empathy. And honestly I don’t condone this kind of superficiality and find it grossly irresponsible to readers who are possibly pining for a life in Italy, too.

Everyone has a right to express the good and the bad, and I’m personally not into the whole fantasy show we’re expected to put on social media.

Even being in a magical city like Florence, I too get stuck in my regimes. I spent a lot of time and energy devoted to my business that I hardly have time for non-work related fun, and often stuck in Florence or at my desk for days on end, in a project, dealing with what seems like 12 fires every 6 minutes or at the gym trying to not gain 60 pounds every year.

While I do try to keep it real, I’m not totally whining about my choice and ability to live in Italy while rocking an awesome self-made career of my dreams. (is this a humble brag?)

But there are drawbacks to “being your own boss” across the world from your home country, friends and family. And in a place like Florence which is a very challenging city, where there is charm there is strife.

There are many frustrations at every turn (i.e. rude shopkeep, avoiding being ripped off/constantly having to be on the defense as a foreign woman, short working hours for utility offices and pretty much anywhere else, just to name a few!) I would write a book if terrible service/infrastructure was actually an entertaining thing to read/write about! Of course I love Italy, which is why I take the bitter with the sweet.

As a result, I began to become what I promised myself I’d never be, and that is a creature of consistent habit. I believe in allowing yourself to feel the feels but eventually making something happen to drag yourself out of it, so I decided to self-fund a “blogger trip” to Sicily you could say.

I usually don’t attend press trips because I don’t like being told what to do, and press trips are basically unpaid bootcamps for you to promote the brand footing the trip, even if they do pay to wine and dine you. Instead, I prefer to research the foods I love the most, and that is chocolate, pistachios and wine. Yes, wine is food and if you argue maybe you’re a monster. 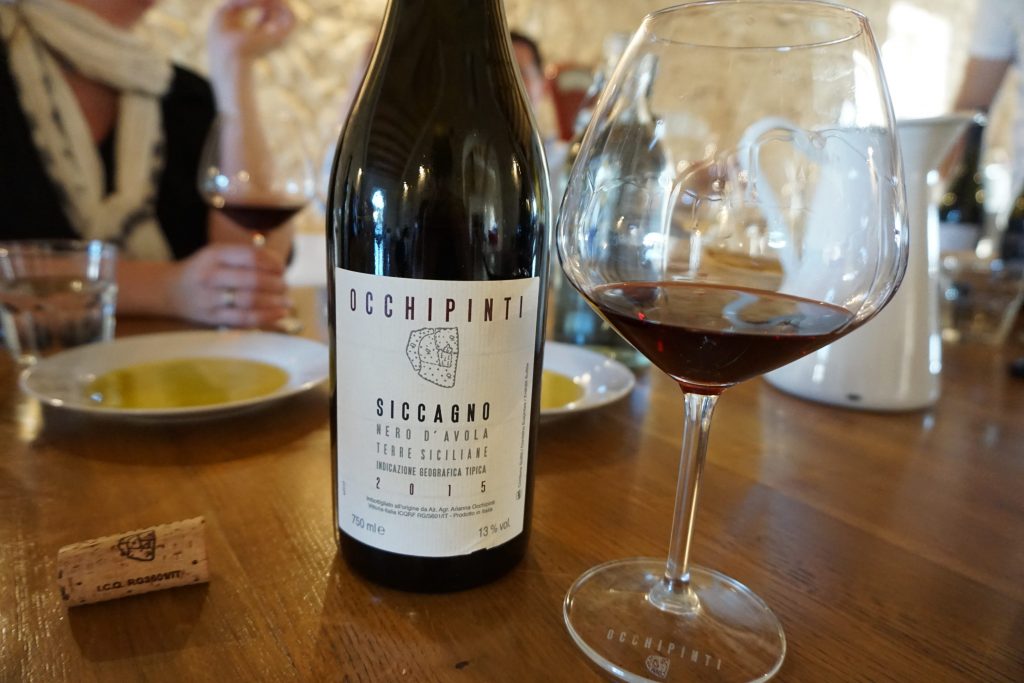 The trip was planned through Etna for its wines, Bronte for pistachios, Modica for chocolate and Vittoria to visit the natural wine cult producers of Nero d’Avola and Frappato in Sicily’s lone DOCG appellation: Arianna Occhipinti and COS.

In terms of articles I’ve penned about the food & wine I found on this trip:

Check this one on Bronte Pistachios here on Mic, or this one about 3 generations of women pistachio growers for BBC Travel!) and was able to tie together my time in San Francisco and Vittoria with this Nero d’Avola story for Seven Fifty Daily. 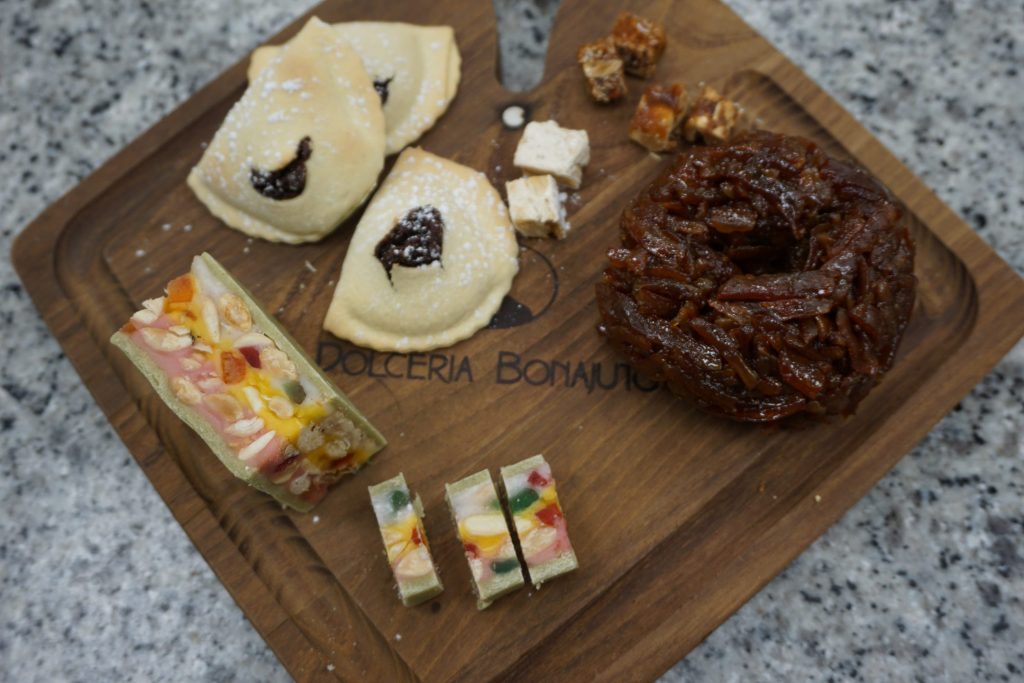 And then I landed a couple spots on Saveur Magazine about Modica’s meat cookies ‘Mpanatigghi made with its historic chocolate! Links in bold to Article and recipe on Saveur for the ancient quaresimali crescent mooned biscotto I’d like to compare to a fig newton- but meaty, cacaoish and moony! 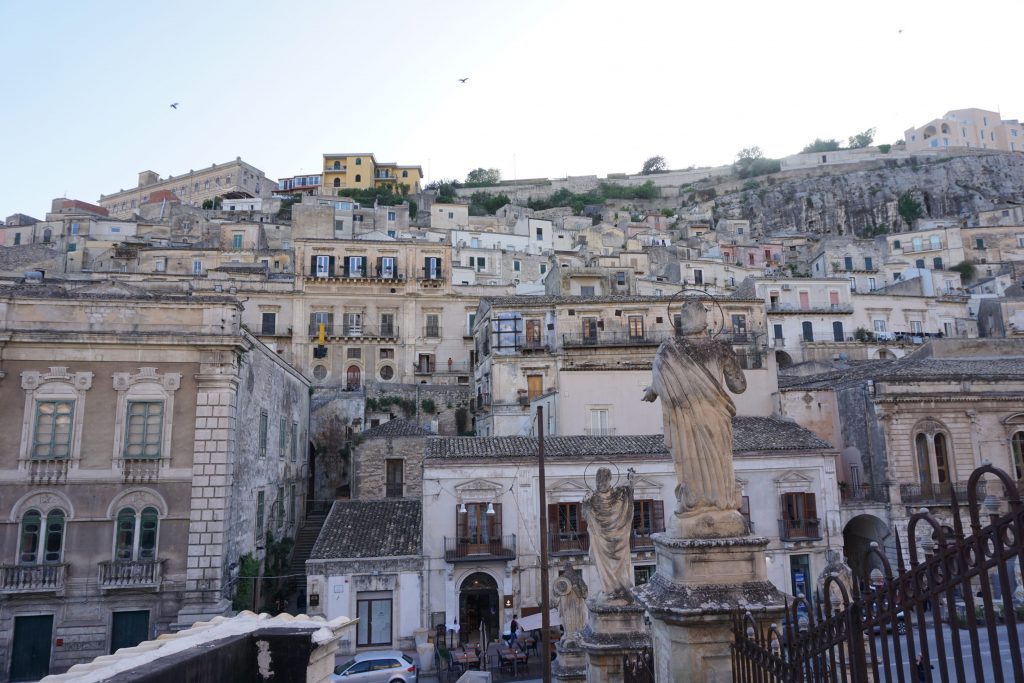 So as I write this from San Francisco on the last day of 2018, I’d like to include this last highlight which was apart of my goals for 2017. Which was, to hit up places in Italy I’d always been pining for like Sicily and Alto-Aldige and to get serious about balancing my health with my job, which is inherently full of calories.

For 2019, I think I will get even more serious about my health and well-being so you might see more healthyish Italian-inspired recipe ideas, travels (on the list is Paris and Greece, and more of Italy like Puglia and Southern Italy gems like Matera) and definitely more food & wine experiences to develop- stay tuned!

In your New Year’s cheer,

p.s. for resources and links to a stellar Modica trip:

I suggest a 3 day stay in Modica, max. It’s a tiny town and I’d probably get bored after 3 days. Pair it up with Noto and make sure to visit Cafe Sicilia for the world’s most famous granita maker as seen on Netflix (I ate there, it was indeed amazing).

STAY!!! Stay at Anime a Sud, I did not stay for free (I did get an industry rate, full disclosure) so I can positively recommend them! The only draw back is they are wedged between Modica alta and bassa so if you are directionally challenged and don’t have patience for stairs, this might be a challenge. This was a super artsy boutique apartment, comfy beds, a whole kitchen and loads of balcony space for sunset aperitivi. STAY HERE! animeasud.it/en/about-en/ I have to give a big mega thanks to my sweet helpful friend Georgette of Girl in Florence- she gave me a handful of reccos for where to stay in Modica and I loved the sound of this place.

EAT!!!! Eat at Locanda del Colonnello AND I PROMISE YOU WILL NOT REGRET IT https://www.locandadelcolonnello.it/pages/menu/

CHOCOHOLIC! Get chocolate and do a chocolate tour at Antica Dolceria Bonajuto, Caffe dell’Arte (also breakfast here, eat all the pastries and all the granita and gelato PLEASE! And ask to see the chocolate artifact room) and Quetzal to visit Italy’s first real-deal bean-to-bar cooperative

WINE IT UP LIKE THE LOVE LOVING LUSH WE ALL SHOULD BE! So Modica has some nearby wineries in the Noto area but I recommend instead making a trek to Vittoria as mentioned. Or maybe stay in Noto for a night (I did and its a lovely town) and visit some makers from Noto. If you are in Modica and want to visit Vittoria, make a visit to COS and Arianna Occhipinti, who produce beautiful terroir driven, natural reds and whites which can be consumed all day with no hangover and pretty much paired with most foods since they are so light yet ethereal.

To get to Vittoria from Modica is simple: either drive an hour by car, organize a driver (costly) or take a train to Vittoria and organize a driver or taxi for to visit both COS and Occhipinti (just 20 min by car from Vittoria’s main railstation from what I remember) Check trenitalia.com for time tables! You could stay somewhere closer to Vittoria especially if you have a car, but I’m a train/no car kind of traveler so I usually make small towns with somewhat active train stations my base.

If you have more questions about visiting Modica, don’t hesitate to comment below! If you plan on visiting Florence this year but can’t make it to Sicily, my culinary walks indulge in some Sicilian specialties like Modica chocolate, cannoli and granite (like on our Gourmet Gelato Stroll– it’s one to binge on!)