Hello my dears! I write you again from a (sometimes) sunny Spring in San Francisco- it’s been quite a whirlwind of 2 months since I was last here! It may seem like I left Florence hastily without much written, but I assure you- a mountain of work was demanding my efforts. I was left without much choice but to leave this space a little in the dark.

Nevertheless, I made sure during the bits of calm I was permitted during these 2 months, to dedicate my palate to food-filled goose chases, like around Liguria in search of the best focaccia. Also to Turin (for well, the best of everything), which I’ll muse on my next post. For now, read on for all things focaccia and a dash of pesto!

During my last year of trying on San Francisco, I discovered its Italian quarter to have a unique link with Liguria. My last SF dwelling was in the historic Italian district of North Beach, and so I spent significant time researching its Italian food offerings. I wonder what North Beach was like 20 years ago, because most of what’s there today is extremely disappointing. Mostly nightmare invoking, like a hungover version of the worst tourist trap in the cheesiest corners of Rome.

Some of the Italian bakeries/cafes don’t seem to care if its identity (nor integrity of products) remains genuinely Italian and shockingly enough, there is not one quality/worthwhile Italian gelateria in the whole of North Beach. Anyone wanna give me a ton of money to invest in one? 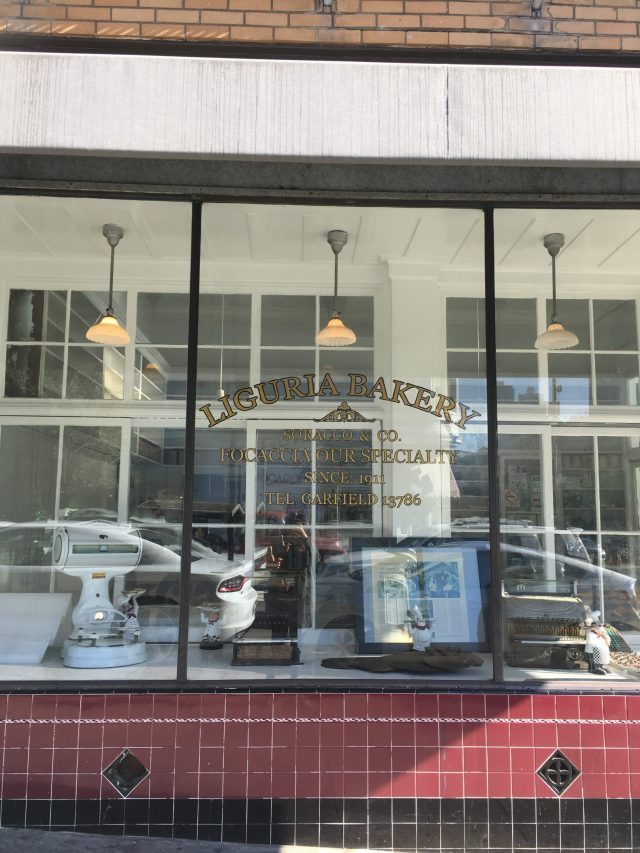 However, some gems could be found and one of which I was particularly intrigued by was Liguria Bakery. For those of you familiar with the city, know and love this bakery. They do one thing and one thing beautifully: Focaccia Genovese/Ligure. The bakery rises a few “types” you could say, like focaccia baked with onion or “pizza-style” i.e. tomato sauce thinly caked atop. But the offerings generally remain unpolluted (I’ll pretend I didn’t see “jalapenos cheese”)

A generous slab of focaccia, cut up into stackable strips if desired, will cost you $6 and they will be the best $6 you spend all week. Open since 1911, at a time when reportedly the area was clustered with Italian bakeries, is now lone-standing (bakery-wise) and still respect their family tradition of this pillowy, salty oily carb dream. 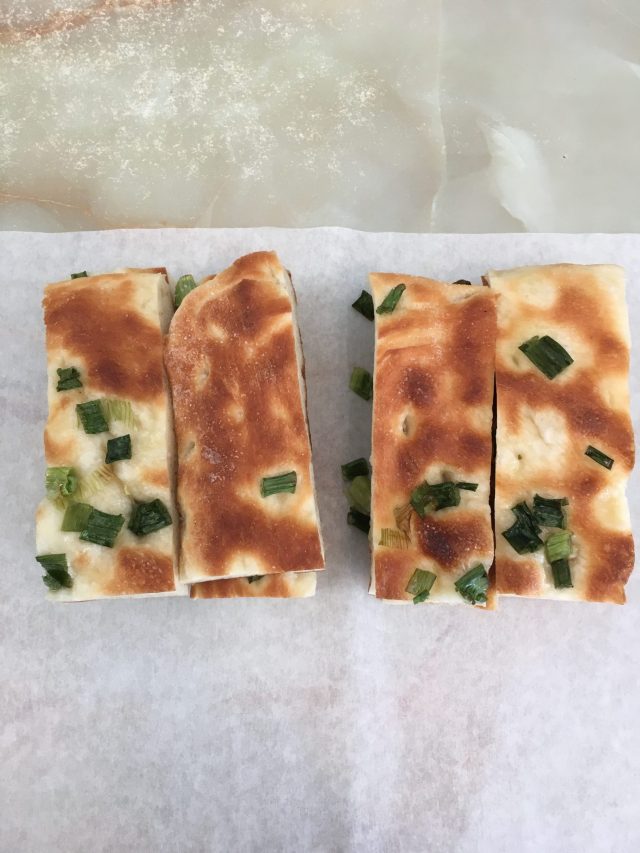 Bear in mind, the term focaccia is used as a general Italian term for flatbread- but it is my distinct feeling that focaccia is synonymous with Genovese. Thus, I would never call a Roman pizza bianca a focaccia. I would never dare to call a Florentine schiacciata by focaccia either. Of course, Puglia does focaccia too but usually round and some found with toppings like tomatoes or potatoes, soft & springy like with Ligurian focaccia, but not sure why I feel like these are the only 2 regional varieties I’d feel okay calling a focaccia.

Admittedly, I hadn’t spent much time in Liguria apart from a few trips to Cinque Terre in my nearly 15 year love affair with Italy. Nevertheless, I was blown away by this focaccia at Liguria Bakery. So I decided I wanted to go to the source and eat all the Ligurian focaccia I could in the span of 36 hours starting in Genova, and understand not only the nitty gritty of this bread but why Ligurians flocked to San Francisco. And also- how could Liguria Bakery’s focaccia stand up to the originals in Liguria?

I’ll cut to the chase- in the end I preferred the focaccia made at Liguria bakery. Those salty bites where oil and carbs melted into something euphoric were the most memorable. Perhaps the better focaccia were to be found outside of Genova or deeper into Liguria’s mainland, since we hopped around coastal villages.

My impressions were that focaccia has become quite industrial as it was hard to find tiny artisanal bakeries who were run in the way Liguria Bakery were run. That is- making just focaccia in relatively small batches following a coveted family recipe and really using top shelf raw ingredients. Focaccia in Genova and in the towns I visited along the Ligurian coast is pretty pervasive and apart of everyday eating life. As soon as I stepped off the train in Genova, I saw locals munching on slabs of focaccia on the go. It’s eaten from breakfast to dinner. For breakfast, they dunk the salty stuff in cappuccino! So it makes sense why its production a little more commercial- the demand and consumption is higher. 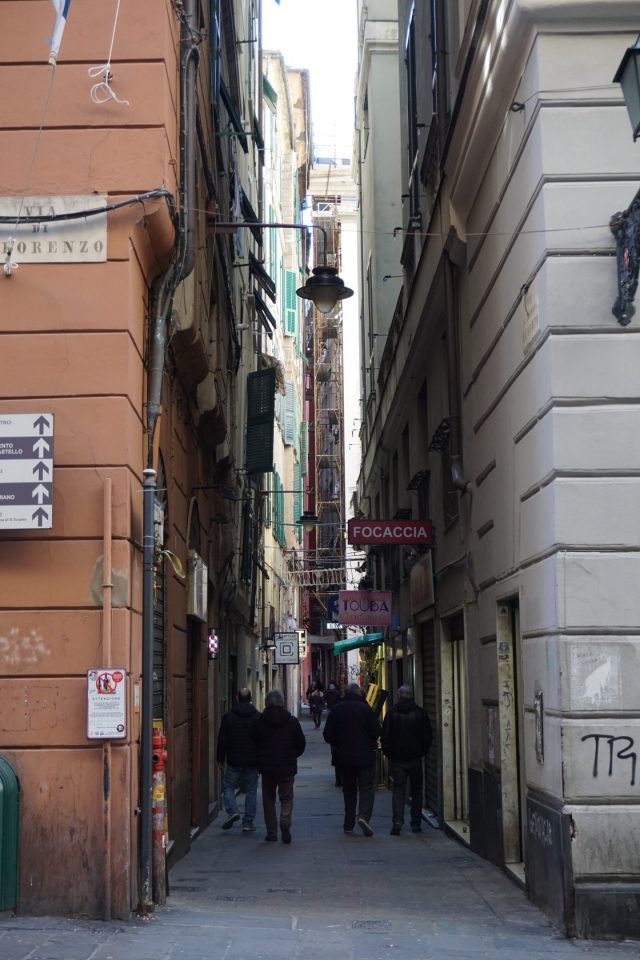 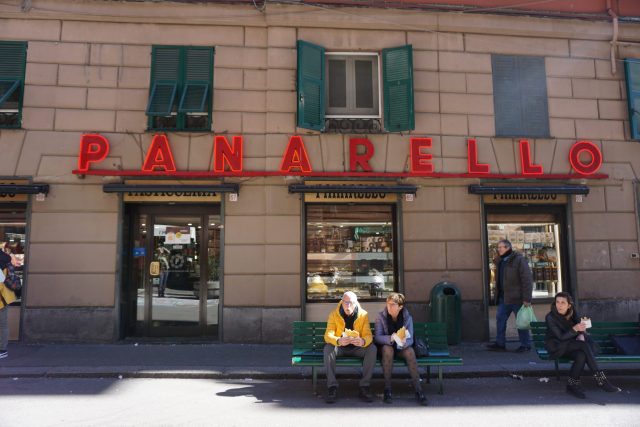 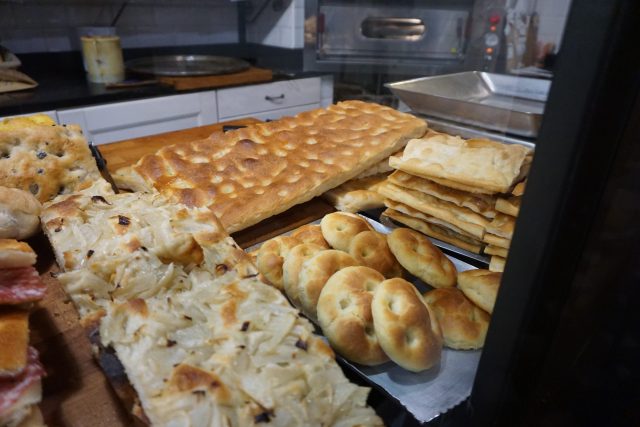 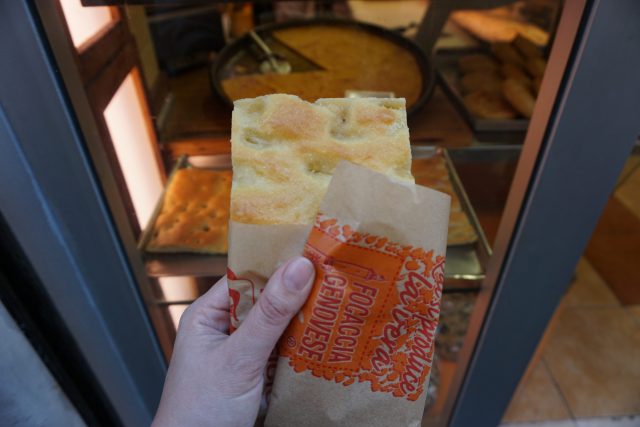 I will say a focaccia I particularly fell for was a variation from the small village of Recco. Totally in a league of its own, this focaccia is unleavened (meaning, flat like a cracker almost and not risen/no sponge in its give) and filled with a fresh, soft creamy cheese. Traditionally it was filled with locally-made formaggetta or prescinsêua, but now stracchino or crescenza are modern adaptions.

Focaccia di Recco has IGP status (which basically means the recipe is officially protected for its culinary identity relating to where it originates, like with parmigiano-reggiano) and you really can’t call a focaccia “di Recco” unless it is made in this town.

I did forget- the only other focaccia I had which beat all the rest (and even Liguria Bakery’s) was at the restaurant in the hills of Rapallo at U Giancu. I can’t encourage you enough to please make the trek to this extremely quirky and eccentric restaurant, decked out in comics and cartoon fantasia. U Giancu is officially one of my favorite establishments on planet earth. 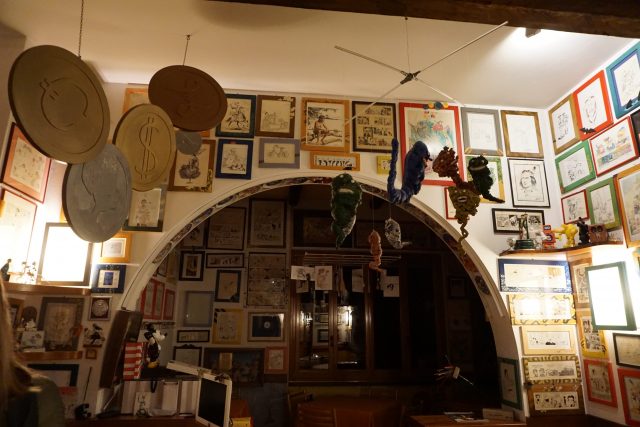 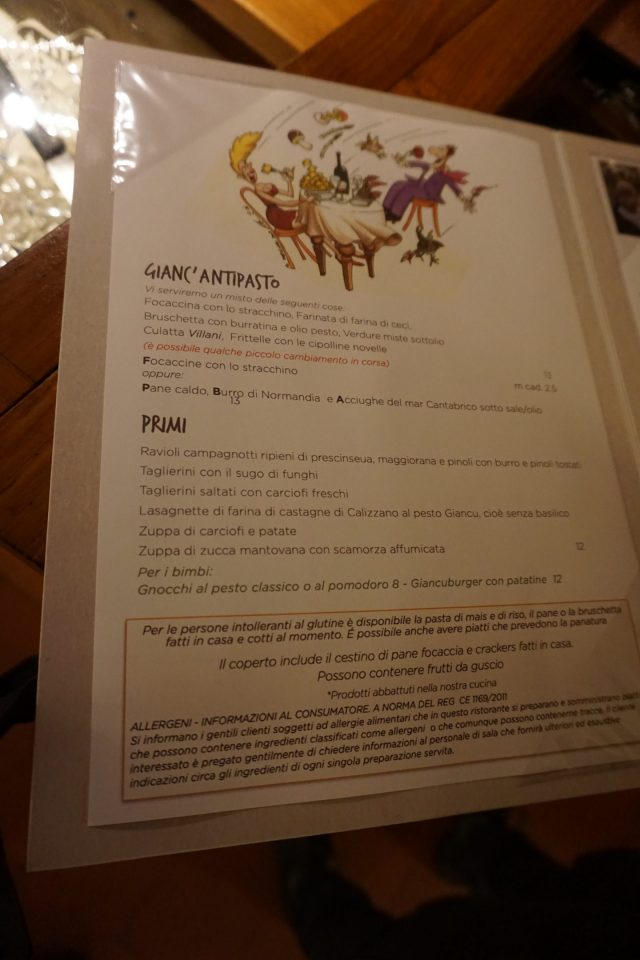 Back to Firenze after a whirlwind of focaccia, farinata, pesto and such. Have to say my favorite oily, pillowy salt speckled slice was from a restaurant in the hills of Rapallo @ugiancu and partly for being the weirdest best place I have been to on planet earth thus far. The nonno owner who speaks 5 languages (perfectly) is really into comics, quirky hats and is decked out accordingly. I’ll be back! Thanks @elizabethtjones for organizing this Ligurian culinary crash course 💚#curiousappetite #Liguria

While not a bakery, the charismatic, soulful owner/chef cares a whole lot about the food of his region, with an obsessive eye for quality raw materials. I know this sounds dry in English “raw materials” but in Italian the term is “materie prime” and I really wish that either “materie prime” became universally understood like “espresso” or in English we had a cooler term for it. Or is there and my polyglot mind is totally trashed?

I was lucky to have road tripped around Ligurian Riviera from Genoa to Sestri Levanti with Elizabeth Jones, who is Milan-based but knows her way around Liguria and is lucky to have a second home there. If you’ve seen (you have) the Netflix food-docu Salt Fat Acid Heat, it was Elizabeth’s mother-in-law Lidia Caveri who taught the world the basics of Pesto alla Genovese via Samin Nosrat. Apart from being involved in badass projects like Salt Acid Fat Heat, she writes at Risotto and Steel, leads food tours in Milan (and if you ask nicely, focaccia and pesto tours around Liguria) and founded Brooklyn’s Food Book Fair. 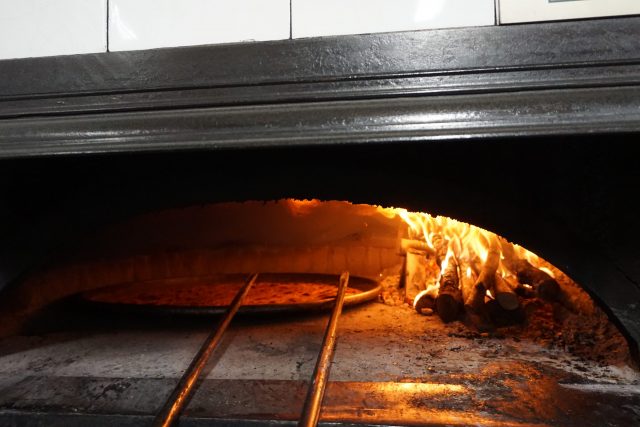 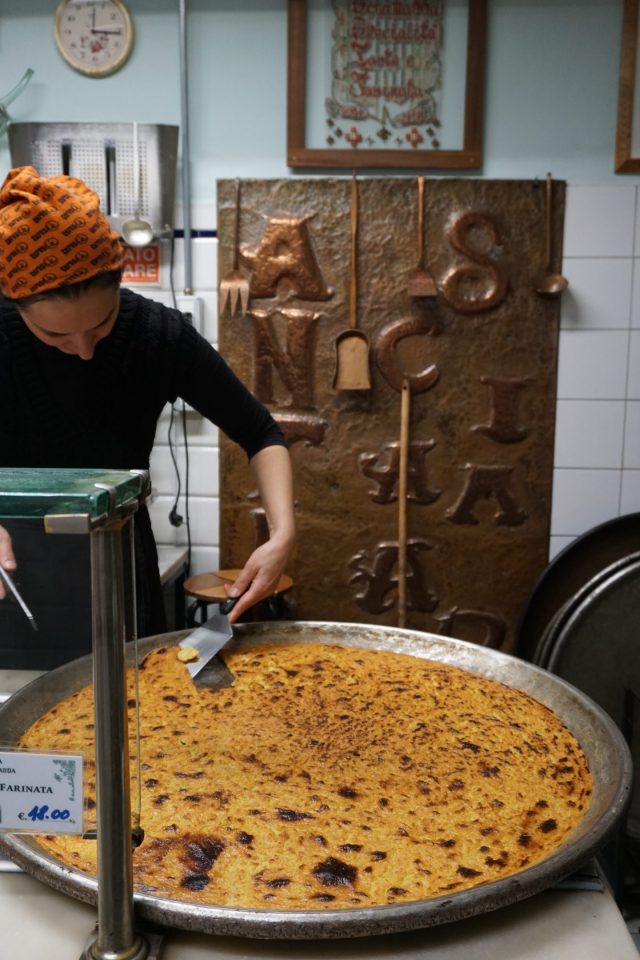 Part of my mission in Liguria was to also talk to locals and understand this Liguria-San Francisco connection. I met a surprising amount whose great grand relatives had settled there and basically all said they went in search of gold but ended up fishing or running food shops when all else failed. To me, I find it fascinating this link of Liguria and the Bay Area. Why not more balanced with Southern Italians like on the East Coast?

The costs to travel in these times weren’t exactly cheap nor efficient and the locals I spoke with said at that time Italians were generally poor around the boot- so I wanted to know how come California was able to attract more Ligurians than Southern Italians? Logically, the Gold Rush is what lured those fortunate enough with the means to reach California. It’s said the Fisherman’s Wharf in San Francisco is credited to the Ligurians (a region marked by a strong fishery trade), possibly by those who came to the Bay Area either failing to strike gold or never making it to the rush to begin with.

So while I have yet to strike gold in piecing together the Ligurian/Bay Area puzzle nor the best focaccia in Liguria, I was able to scratch the surface of one of my most random food-fueled quests.

In case you’re thinking/wondering: cool story. but are you in Florence? why San Francisco?

As Queen once sung, “to avoid complications, she never kept the same address…”

In other words, stay tuned! 😉

In your focaccia trust,

4 Comments on In search of the best focaccia in Liguria, inspired by San Francisco