May I confess something to you? I love all things that are baked. I think baked goods are an expression of love- so much works goes into making the stuff and it creates so much joy as a result. I go crazy when I find either a shop full of owners with passion and love to make delicious food for good pricing. END_OF_DOCUMENT_TOKEN_TO_BE_REPLACED →

Brace yourself, Seattle. I think I found the one hole-in-the wall that is not a one-hit-wonder. The street food that really involves something besides pretentious “sliders” and “authentic” tacos.  Let me preface this post with the fact that I have never been to Asia. I am nothing close to an expert in tasting exotic Asian foods. However, have faith in my palate and critical eye to suggest to you what I think is the most heavenly street food that 8 dollars can buy in Seattle, and that is: Malaysian-style food at Kedai Makan. END_OF_DOCUMENT_TOKEN_TO_BE_REPLACED →

***PLEASE NOTE THE FOLLOWING TRAVESTY: U+B has closed- they didn’t even leave a note! Apparently, they are moving to a new, bigger location near Piazza San Marco. Stay tuned!***

It is not impossible to find good food in the center of Florence, in fact that is where some of the best food in the region can be found. However, it is very hard to find it. You need to know where to go. You need to know locals. Or follow bloggers who live there. Or follow the local Yelp chapter. But throw tripadvisor out of the window. And chuck out sheer luck unless you have a curious nose like mine, constantly sniffing out the good s***. It is so unbelievably easy to get ripped off in the center of Florence. But alas, I have a tip for my dear curious readers: Uscio e Bottega located just a stone’s throw away from the utterly famous duomo. END_OF_DOCUMENT_TOKEN_TO_BE_REPLACED → 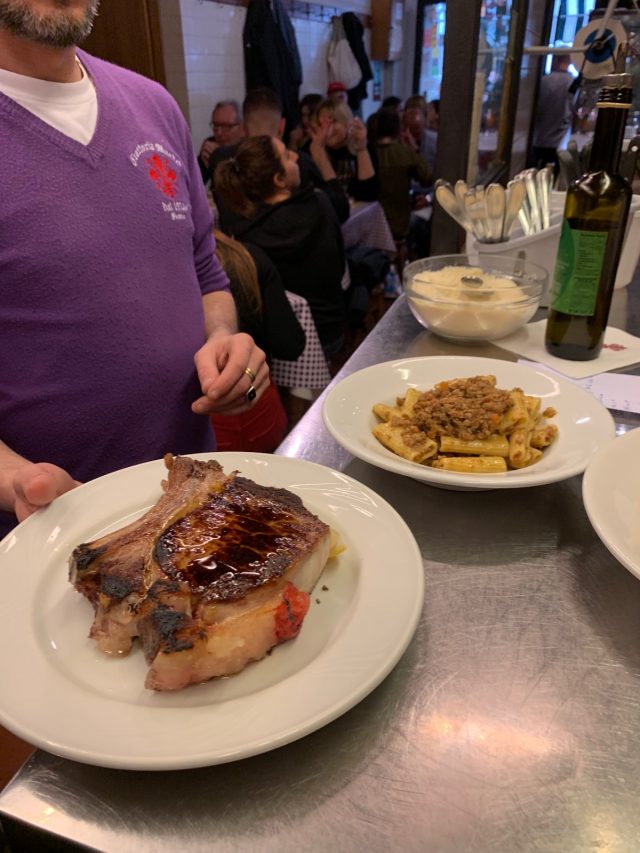 As much as I enjoy a fancy cave aged, herb crusted goats milk and a oily, aromatic glass of Sauvignon Blanc from the Dolomites, at the end of the day I simply adore a good rustic Tuscan greasy spoon hole-in-the-wall with house wine that could pass just as easily as oily gasoline…

This is what I ACTUALLY adore most about Florence. It’s the family run, health department renegades, the hole-in-the-wall where you sit elbow to elbow with strangers at your table, the Tuscan peasant food oasis that has absolutely ZERO pretension…Italian food is this to me.

Fancy name brand chef restaurant serving shot glasses of heirloom tomato coulis and vanilla pod risotto with some equally pretentious mystery “foam” that lacks not only soul but the ability to make you break a sweat when you’ve eaten a little too well. Put it away. I don’t want it. Unless a gorgeous albeit stereotypical Mediterranean man is insisting on taking me there (happens ALL the time! ugh- lay off, Fabios!), I will snub it just like it snubs me with the requirement to be anything less than a hot mess in my normal WFH pj attire for entry. END_OF_DOCUMENT_TOKEN_TO_BE_REPLACED →

There was a point in my life in which I was vegan. At that time, I also was pretty disciplined in karate and took dance. I was one healthy little lady. And not a deprived one, neither. Vegan food has a bad rap. Its not all tofu, bread and margarine. Its also creative milks made from luscious almonds, fermented bbq “bakon” tempeh, cashew tahini, sprouted grain & bean burgers, olive oil mock-anaisse, raw chocolate avocado mousse pie, coconut milk ice cream…as you can see, it can get quite decadent. In the U-District, I realized there are very few breakfast joints and can embody the image of the rolling hay deserted western town on a weekend morning. There is Portage Bay, but forget it unless you have a reservation or get there at an unfair time, unfair to your REM cycle that is.

After strolling up and down the ave, looking for warm eggy goodies, I landed instead at a tofu scramble hole in the wall called Wayward. They are pretty popular even among non-vegans. They have hearty portions of veggie stuffed burritos, massive piles of spiced home fries and even old school sweets like cheez blintzes. As well as home made biscuits with vegan “sausage” mushroom gravy with generous sides of garlicky kale greens. In the kitchen, all you can see are cast-iron pans that are an obvious flavor-savour plus. I have a question mark in the headline because what I ordered was totally gross but it was my own damn fault. It was a vegan Monte-Cristo. Which traditionally is turkey and some fancy white cheese slathered smoked and melted in between 2 buttery sugary maple hunks of french toast. I thought that by eating this, it would be a tongue in cheek gesture towards food novelty. But there is nothing savour-worthy of plastic dry tofurky sandwiched in between 2 rubbery earth-balance pan seared hunks of what seemed like angel food cake bread, without the pillow sweet, just the pillow white bland texture. And a dried-out side of hashbrowns that was only salvaged by dollops of hot sauce and ketchup. But every place has its crappy menu item, and even the cashier warned me of the tofurky. I should have taken heed. But my neighbor’s plate, the biscuits & “gravy” with garlicky greens,  was quite nice, and nice enough to have shared and taken pity on my fearless mistake. The biscuits are warm and buttery-like and perfectly salty. Nice and ‘shroom earthy hint o’ umami gravy, with pleasant chunks of broccoli and peppers. Greens held up nicely and werent overdone and still bright green.

If you want something hearty, semi-greasy spoon, chock full of greens, vegan and cheap Wayward Cafe is a good bet. Just run like hell if you see any tofurk-slice anything!