I was 1st introduced to Bottlehouse in Madrona by chance for a friend’s birthday gathering. Since then, I have brought a handful of friends here almost as if to vicariously relive their 1st time visit amazement. Bottlehouse is a wine bar that refers to itself as a tasting gallery, as if this were home and the owners decided to delicately decorate it with only the finest selected wines. And by the way, everyone’s invited to dwell and be happy. I was charmed. Not only by the cute little house with grapevines grazing around the patio, but  I was charmed also by Madrona itself. I can’t quite describe its extreme quaintness and how it makes me flutter but if you have ever been to London, one could say that Madrona is a bit reminiscent of Portobello Road.

The owners are genious. Wine is enjoyed here, people are here to be casual and relax, and food is intentionally paired. There is food, however there is a strict boundary that I quite respect. Meaning that there are no small plates, there are no entrees, and there are barely desserts. What they do have are only the best local artsian cheeses and renowned Armandino Batali’s Salumi cured meats as well as staple accoutrements such as meaty castelvetrano olives, fried and sea saltyspanish marcona almonds, cornichons (crunchy crisp swoon!). 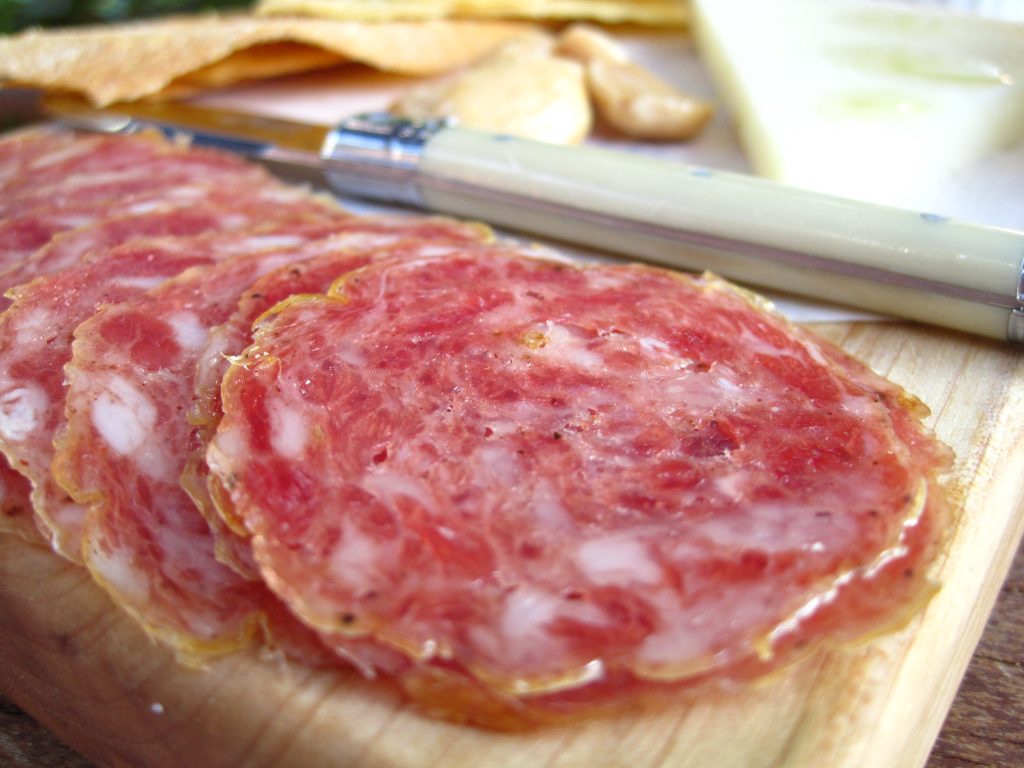 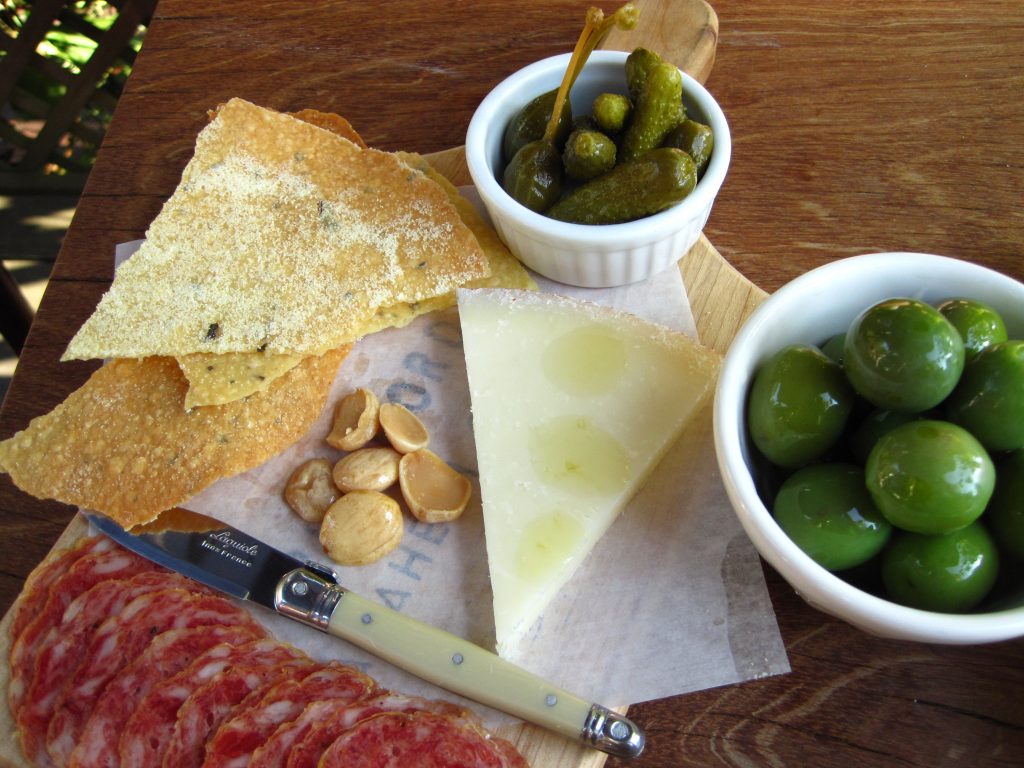 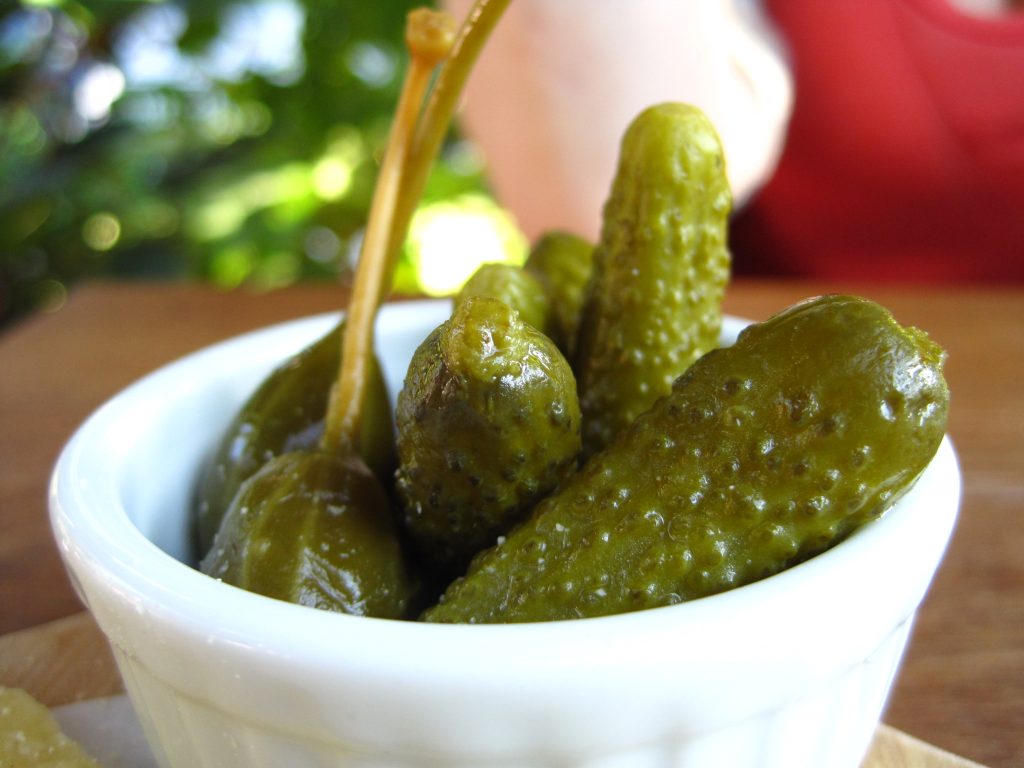 For dessert they have a teeny tiny selection of deliciously moist and butterwhipcreamy whoopie pies and fresh churned ice creams. 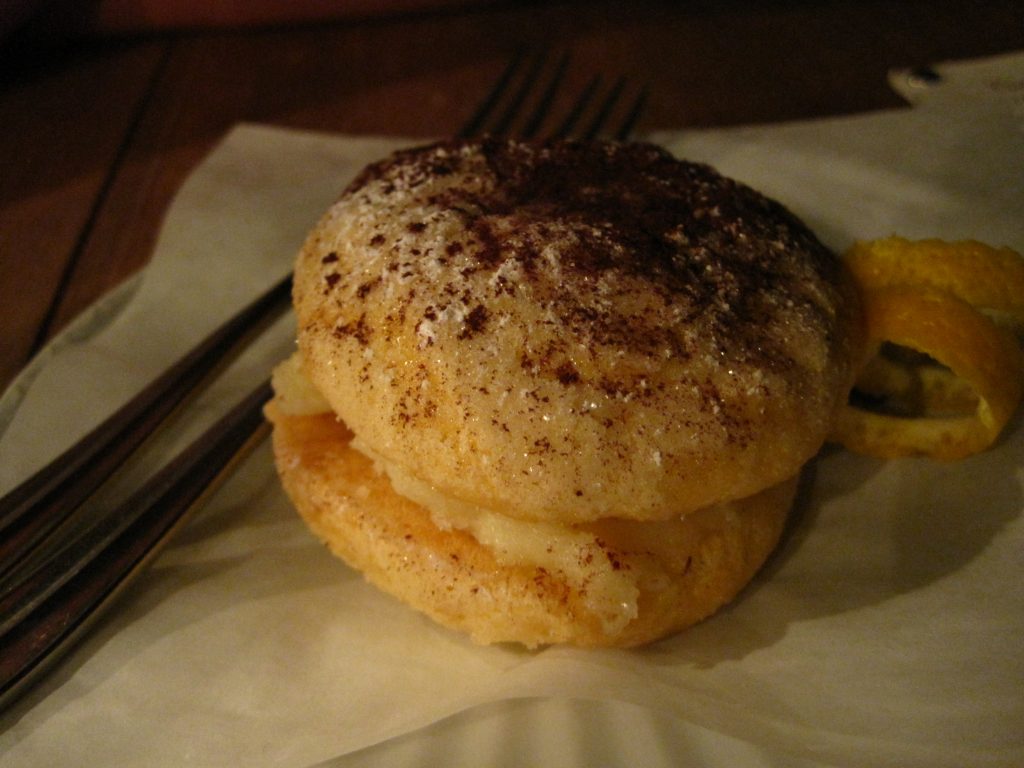 The one thing I don’t quite understand is that they have High 5 Pies. It’s pretty cliche’ to rag on High 5, but in this case they really have no place at a wine bar like this. Especially since they are pretty mushily non-complex and have little to do with accentuating a pour. However, with still having a limited selection of bites I have to say that this is remarkable and a smart way to remain distinct as a wine and tasting bar. But don’t be fooled, the nibbles they do have are seriously selected. They have a resident cheesemonger, who has delighted my epicurious heart on the few occassions I have dwelled. The cheesemonger makes a pitstop to your table after having decided on a wine in order to inquire a bit about your cheese preferences (soft, pungent, sweet or nutty to name a few). Those attributes are then taken into consideration with regards to what wine you chose. If that weren’t brilliant enough, once the cheese and charcuterie board have arrived you might be so lucky as to get the historical background for one of your selections as I did with the Pyramide Frais Cendre. 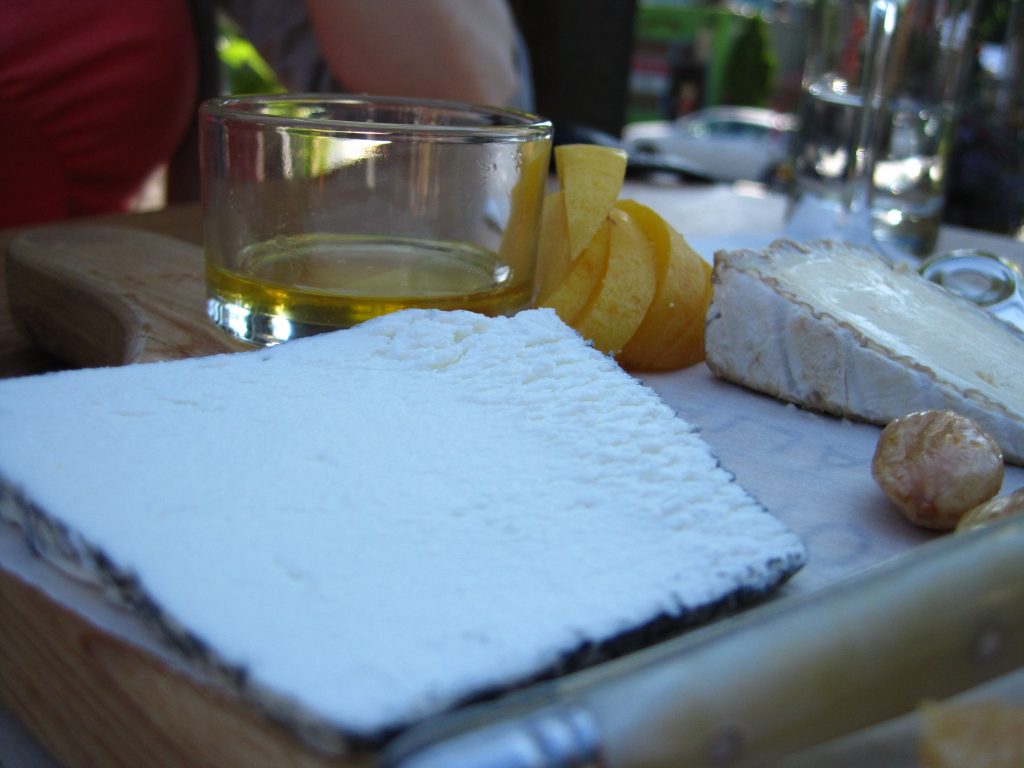 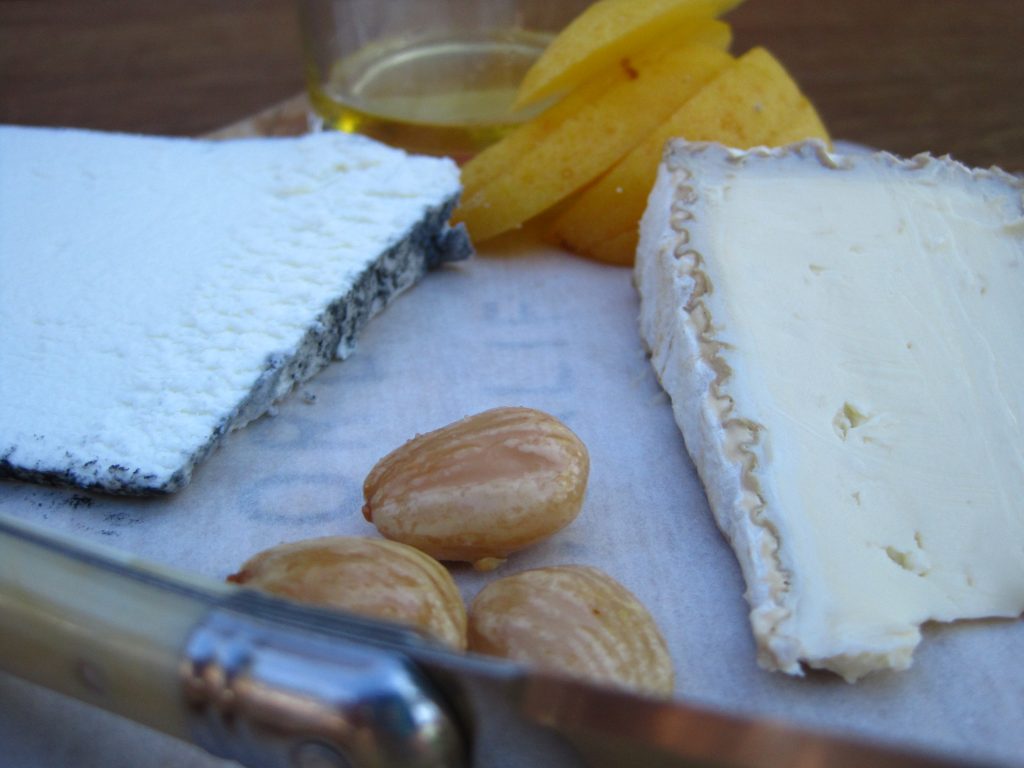 This cheese was a soft goat chevre-like coated in ash, and seemingly was in a pyramid/cone shape but the very tip-top seemed to be missing. Anyone else wouldn’t have noticed this “minor” detail, but the cheesemonger pointed out that this cheese dated back to Napoleon I. According to historical legend, Napoleon was so spiteful towards all things Egypt after having suffered a defeat, that he chopped off the tip of this pyramid shaped cheese that his chef had developed specially for him during his time away in Egypt. Wow! Who knows if this is true? Even if it isn’t, who cares!

I have to say that Bottlehouse is, a ticket to truly unwind and pamper your senses. It is the one of the 1st establishments in Seattle to offer some of its wines on tap. They even have an BH house branded red.  I enjoy and appreciate the “market” feel and the human factor involved, where its not just some shot in the dark whether or not you’ve chosen food pairings off an inanimate menu. No, someone who knows their stuff has you covered and will talk to you about it as well as delight you with off-beat food knowledge. Many, many kudos. And the real kicker is that they have a happy hour, even on Saturday! Please do yourself a favor and relax here. And take me with you. Cheers! 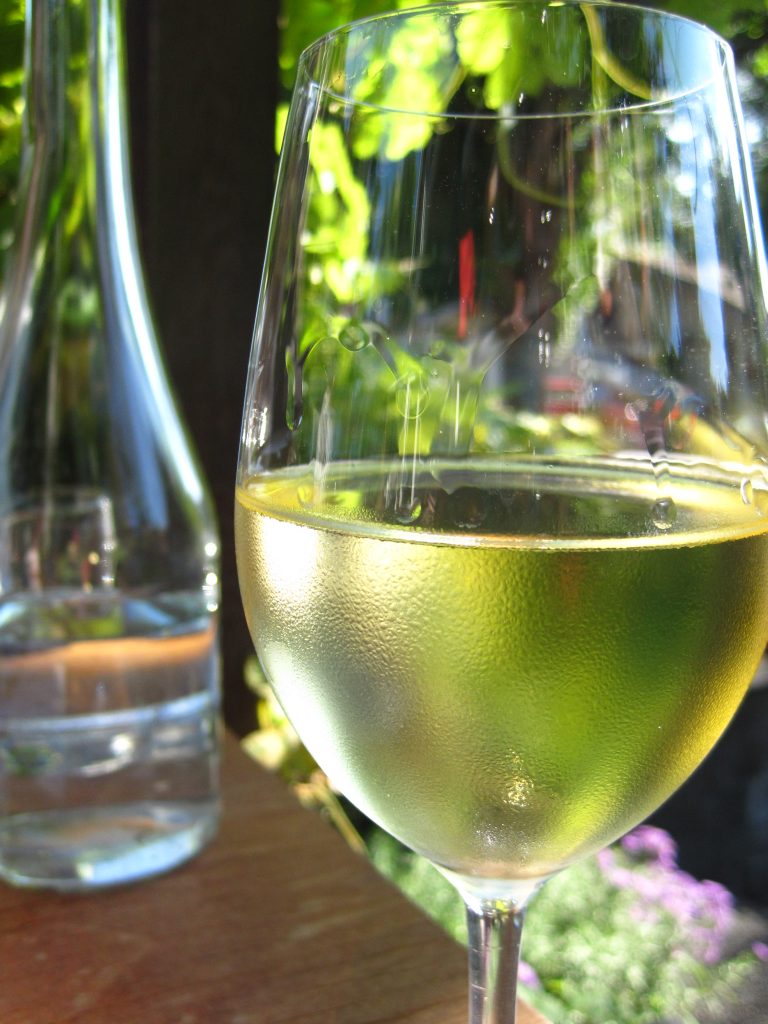